Results From A Bengal/Ranger Crossing (December 16, 2004)

Marc got a lot of feedback on his original Bengal/Ranger hybrid, so he decided to implement a bunch of the suggestions. The changes to the design are fairly minor such as adding a texture to the sides of the flight deck but it all adds to the overall effect.

I pretty mutch agreed with most of the comments and followed their suggestions, minor stuff really.
The one thing I didn't really agree with was Edfilho's suggestion of putting wings on it. BUT I'm always willing to consider the other side of things...
so I tried it and something strange happened 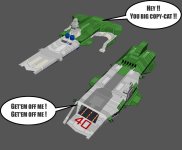 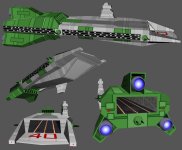 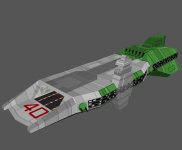 ​
We've said before it's an interesting design, and who knows, one day it may make its way in to a fan project. You can read the suggestions made by forums posters, or even suggest something yourself right here.

I like it. Maybe it should still have those prongs in the front since otherwise it would look too edgey from the top view, but otherwise the ship catches the WC1 design spirit quite perfectly :thumbs up:

the openings topside in the front of the engine section.. are they launch tubes?

Hmm.. interesting.. I didn't think so, but it could use some launch tubes off the sides. I thought about the front prongs a lot and think I like how they've been done here. The prongs are still there.. they've just been smoothed down and connected with a bit of a deck.
S

Very nice, if not just a little trek refitish in concept, but I like it. And really I could see something like this happening. What a lot people on here don't seem to realize is that large craft like carriers, even today, are designed to last upwards of 60 years, in salt water environs. Now, take space ship, which, other then the radiation, is in a far less hostile natural environment. It would likely be built and designed to be able to last upwards of a hundred years, with regular refits and updates/upgrades of course. So, the design you are showing would not be outside the realm of possibility. As tech improves the newer models off the line would have new powerplants, engines and reformed bows, new weapons, new conning towers/islands, etc... Take even the modern Nimitz Class and look how they have changed over the years, true most of the changes are internal but you can still see the changes between the good old Nimitz, CVN-68, and the latest concept of the Bush, CVN-77. They have changed the island, makign it much smaller and more compact as well as having fewer obstructions. THey have added sensors, and changed them over the years. THe fingers in front of the catapults have gone away. The original nimitz had no weapon's sponsons, all of them are now built, or modified with a minimum of four major weapon's platforms. Internally the changes are more drastic. THe Reagan, by the judicious use of fiber optics has lost something like 50 tons or more in weight compared to the copper wiring in the original Nimitz.

So overall I like your design concept and could see this and the later era Rangers sitting alongside in a dock somewhere. Maybe you can make a couple of the evolutionary design steps as well, showing how the design has been modified over the years progressively.

I'd just angle the forward prongs inwards a bit, to make the end of the flight deck look a bit more like the Bengal's runway (which is narrower on the tip than on the hangar's entrance). Maybe even make the edge shaped like a > instead of a straight cut, to make it more like in the Bengal as well.

That's about the only thing I can think of, though, I really like how the ship looks.
T

I never liked the original Bengal Class design as it looked unworkable as a combat vessel but this "refit" fits in just right.

looks cool so far
I might have the launch bayopening made a littel longer but it's still ok.

IT looks great, and I think Ia have a good sugestion: Why not put the Bengal "wings" on it? it would look even better, and there would be a place to put the launch tubes.
L

Eh, I don't think it's really supposed to be a bengal/Ranger crossing only incorporating some elements from the Bengal. He said that it's supposed to be how the Ranger could've looked during WC1 times(it was refitted a few times, last refit mentioned in WC3 AFAIK) If you put those bengal wings onto it it looks too different to be recognized as a Ranger. And I don't believe that the Rangers ever had launch tubes.
O

Looks great as it is... I say don't fiddle with it. The idea is for it to be a crossing, not a merge. You don't need to retain as much as possible from both designs.
D

I agree changing it anymore would make it too Bengal.

I really like the way the conning tower looks.

The bengal's engines are a nice detail

. I really like the idear of an engine instead of a cooking plate

I love the design but have only one problem with it: the rear turret. I don't think its placed very well. Why? Because its firing arc is right in line with any friendly craft attempting to land. I know its meant to cover the ship's aft and is ideally located to prevent enemy fighters from flying into the landing bay (you know what I mean... flying in and shooting up the ship from the inside) but most pilots would be extremely nervous trying to make a combat landing with a turret firing live ammo that close (especially if their ship had lost its shields and/or was damaged).

Removing the turret would leave the ship's aft wide open for attack, so moving it would be the best idea. Maybe to the lower rear, so that its nicely settled between the two lower engines so it's main firing arc wasn't right into the path of ships attempting to land. Then to provide increased protection for the ship's hind quarter, an additional pair of turrets could be placed on top of the ship to the port and starboard of the upper engine. This way the aft area is still protected. (see my crude ascii pic of the ship's aft below).

Of course, it increases the ship's cost by two turrets, but this config could exist as a previous refit (or the next refit after your version).

Aw, It would look soooo pretty with Bengal Wings...

@rapierdragon-
I agree your placement of the turrets is more logical (and personnally I'd be nervous landing under -litteraly- gun point) but I whant it there because it's gives the ship a sort of desing history... I know, I'm strange. But I can just imagine the pilots bitching about that turret in the ready lounge or maybe by some cruel twist of fate someone DID get vaped while landing in combat. It just gives the ship more drama. Man, I AM strange...
Anyway, you'll notice that their configuration is more along the lines of your drawing on my WC2 version of the Ranger.
You must log in or register to reply here.
Share:
Twitter Reddit Pinterest Tumblr WhatsApp Email Share Link
Top