That was first released in 2001, which sounds too recent.

You may be thinking of the title Stormovik: SU-25 Soviet Attack Fighter, which was released in 1990. Video below:


I never played it, but it immediately shows its similarity of art style with Chuck Yeager's Air Combat. I'm pretty sure some sound effects are unchanged between both games, especially the landing gear noises. There's a Wing Commander connection, too: music composed by George "The Fatman" Sanger, although in both cases I think the only music is in the introduction.
D

Muz1234 said:
Definitely not Jane's, and not any of the Ace Combat titles... If the game is lost or forgotten, maybe the game is really lost and abandoned?
Click to expand...

Almost no games are "lost". Almost every game that saw commercial release has an entry on MobyGames and some dedicated person posting Let's Play videos to YouTube. We can narrow it down. But we need you to help.

1. How did you start it?
Did you type a command into DOS? Click on an icon in Windows? Insert a disk into your Amiga?

2. Did it display a company logo when it started?
About half of all flight simulators in the 1990s were published by MicroProse. 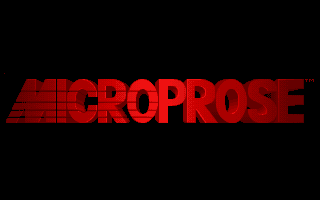 Another common publisher was Electronic Arts, although many games used their own variation of the logo.

3. How colorful was it, and what resolution did it run in?
At the start of the 1990s, pretty much everything ran in 320×200 pixels. Some games were using 16-color EGA graphics, some of the newer ones were 256-color MCGA. Early games that used MCGA often still showed signs of the artists working in 16 colors and then adding a few gradients, like F-15 Strike Eagle II here. 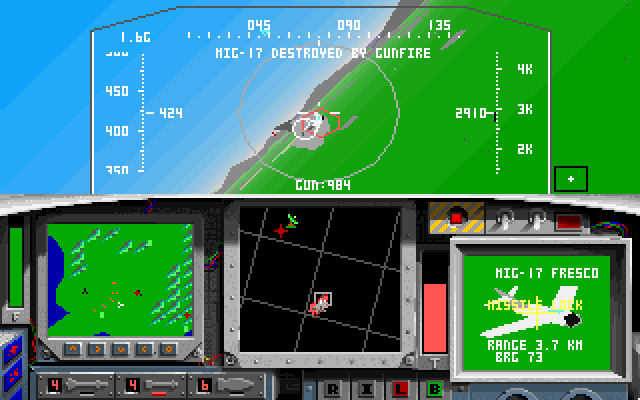 As MCGA became standard and artists got more confident, colors became more subdued. The screenshot below is from TFX. 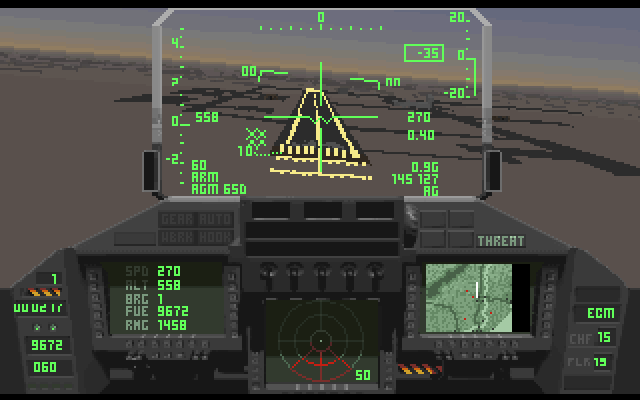 During the mid-1990s, games started supporting 640×480 SVGA. This screenshot is from Jane's Combat Simulations: ATF - Advanced Tactical Fighters. I acknowledge you said it's not Jane's, but this was an easy screenshot to find. 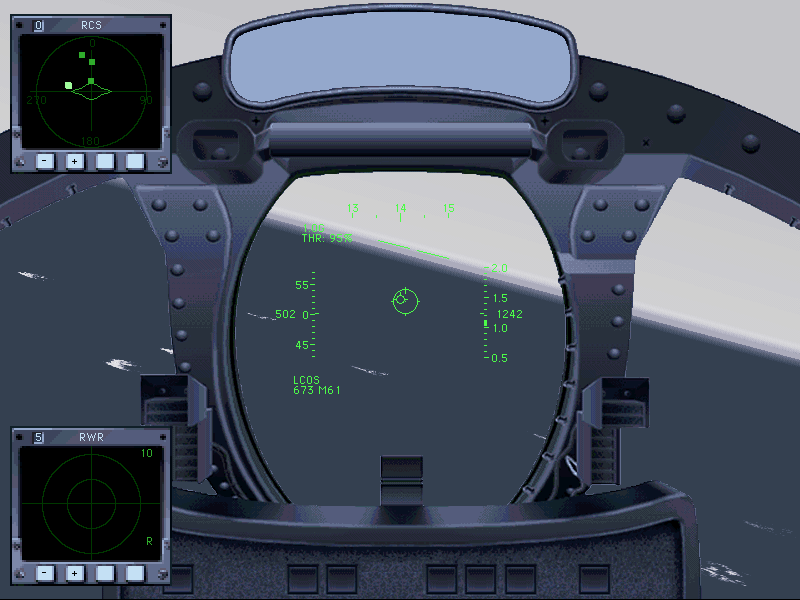 4. What were the sounds like?
You mention "Some cutscenes or weird screams if you crash during take-off". Was there speech, during cutscenes or in flight?

5. How did the menus work?
Dynamix games tended to be full of text menu options, like this one in A-10 Tank Killer.

Others drew rooms where you click on people or objects to do something. The Wing Commander series made extensive use of this, but weren't the only ones. These are from Jump Jet / Harrier Jump Jet by MicroProse. 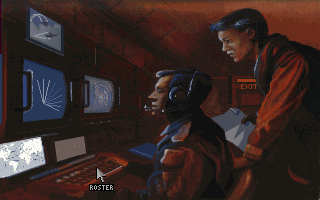 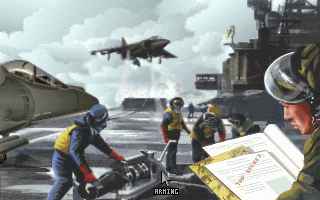 As the 1990s progressed, there were often too many options to draw coherent rooms for all of them. To try and retain some atmosphere, simulators would use text menus but dress them up to look like the buttons and switches from the aircraft you were flying. This is just from the installer for Jane's Combat Simulations: ATF - Advanced Tactical Fighters. 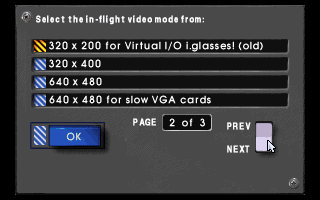 6. What were you offered in those menus?
Were there single missions to select from?
Was there a campaign?
Was there a mission builder?

7. Could you select your plane?
MicroProse made a lot of simulators where you flew one specific aircraft, like F-117A Nighthawk Stealth Fighter 2.0. However, you would probably remember the name of the aircraft if it were right there in the game title.
Some get even more specific, with Megafortress giving you a specific customised B-52 from the novel "Flight of the Old Dog".
Dynamix games like Aces Over Europe had a few aircraft but I think the career mode always chose your plane for you.
Evasive Action had a few different types, but spread them across different time periods.
Birds of Prey had 40 different aircraft!
D

[Starting as a separate post because I seemed to have exceeded a limit on the number of pictures in a single post.]

8. How flat was the landscape?
Computers in the 1990s struggled to draw much of a landscape, leading to flat areas with occasional patches of color. These are from Falcon 3.0 and MiG-29: Deadly Adversary of Falcon 3.0. 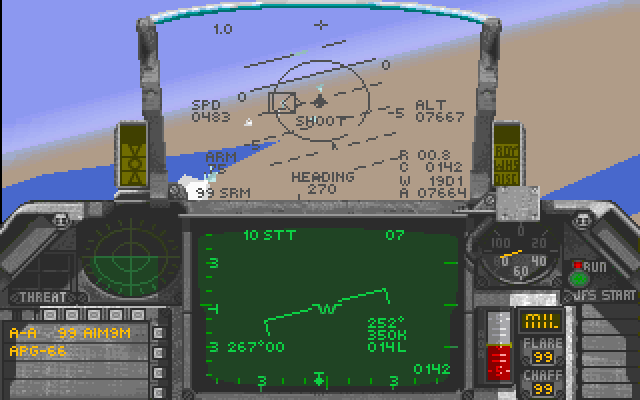 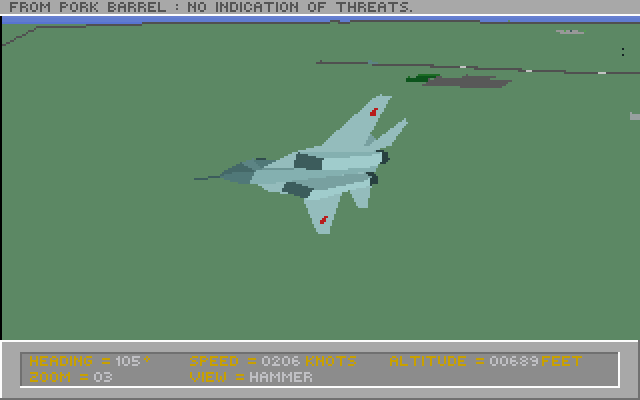 Sometimes there would be hills, as giant lumps poking out of the ground. This is from Chuck Yeager's Air Combat. Incidentally, collision detection with these was very unforgiving. 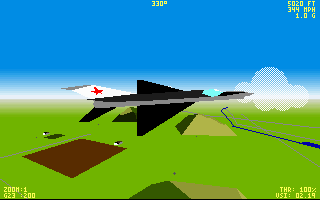 Jump Jet / Harrier Jump Jet managed a remarkable amount of Gourad shaded ground for 1992, although it had a very short draw distance. 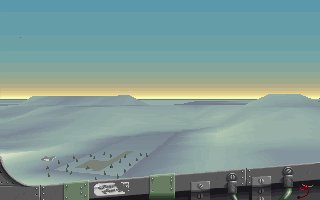 The helicopter sim Comanche: Maximum Overkill, and its sequel Werewolf vs. Comanche, drew astonishing landscapes using vertical columns. Unfortunately the AI tends to see through the hills, so you can't make use of the landscape as much as you would like. I don't know of any fixed-wing aircraft games using this, though. 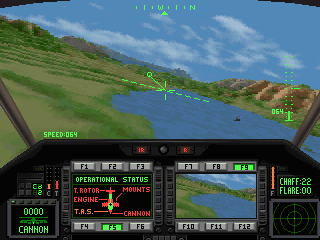 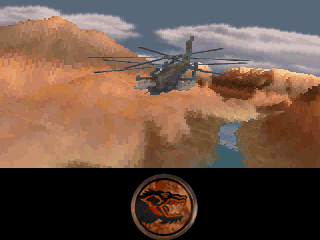 City blocks only needed a few polygons, but JetFighter II: Advanced Tactical Fighter in 1992 is making extra by drawing lines and shadows for them too. 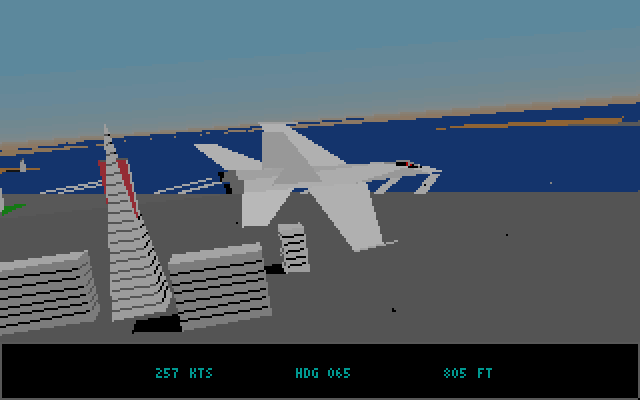 By 1997, JetFighter III is drawing textured polygons and fog, all in high resolution. 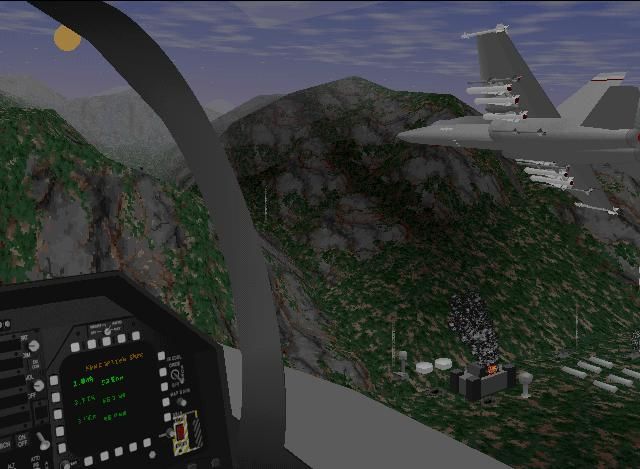 9. Were there aircraft carriers?
Setting action over the ocean kept games running smoothly. I don't know any game in the 1990s that had no ground at all, but having you do your takeoffs and landings from an aircraft carrier saved on detail when the player was low to the ground, such as Flight of the Intruder. 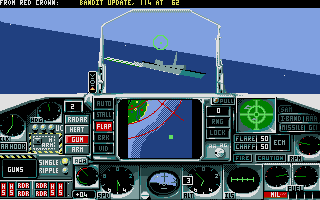 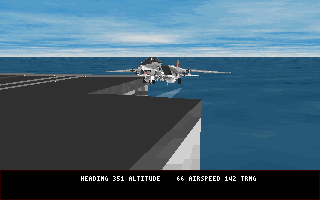 10. Were there characters you could talk to?
Since this is a forum about the Wing Commander series, I'll finish with a question about characterisation. Some other games had voice clips from your wingmen, or would finish a mission with your Commanding Officer praising or insulting you. Howeve, the only game from the mid-90s I'm aware of with jet aircraft and actual conversations is Strike Commander.

Conclusion
It would be fairly lucky if any of the games I've posted screenshots from here is the actual one you're looking for. But if you can tell us which features are close to what you remember, that would help us narrow it down.

For everyone else, I hope you've enjoyed this trip down 1990s flight simulator memory lane. Has this reminded you of any other favorites from the era, or needing to read a 100-page manual just to get the engine started?
M

Although this is not the game what I am looking for, but some example of other flight sim that has crash scene, during flight... 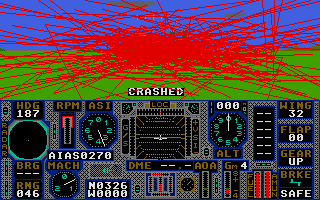 If it turns out to be DCS, I'm eating my left sock.

Is that a good example of what the HUD looked like or does it look more like the HUD of one of the games that @Dondragmer posted?
M