It's not every day that we have new photographs from the surface of another planet, so today here are a few shots from Titan. 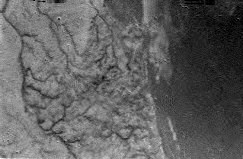 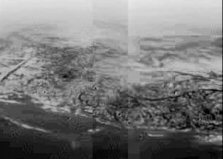 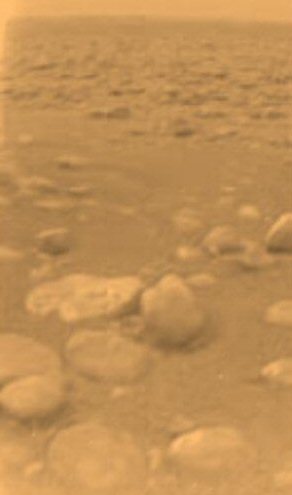 [/url]
​
Shot three is the first color shot from the surface, featuring a number of small rocky blocks of ice or another substance. The other two are aerial shots showing what could be a coast and streams of liquid methane. You can find more shots and descriptions of the Cassini-Huygens probe here.

Titan is one of Jupiters moons, can moons be refferred to as planets? (Not being all know it all here, its a genuine question)

I believe that technically they can, as a planet is defined as anything larger than an asteroid. Certainly the large moons around the gas giants are often referred to as planets...

"Another world" would probably be better wording, though.

And Titan is one of Saturn's moons.

just call it a moonplanet and save yourself the headache.
I haven't seen all the photos on nasa's site yet, but is Titan all brown-ish like that?

Definition of a Planet

The IAU notes the very rapid pace of discovery of bodies within the Solar system over the last decade and so our understanding of the Trans-Neptunian Region is therefore still evolving very rapidly. This is in serious contrast to the situation when Pluto was discovered. As a consequence, The IAU has established a working group to consider the definition of a minimum size for a Planet. Until the report of this Working Group is received, all objects discovered at a distance from the Sun greater than 40 AU will continue to be regarded as part of the Trans-Neptunian population.
Click to expand...

Some further reading shows that any mass with less mass than a brown dwarf (which is more of a failed star than a planet) that also goes around a star (is part of a solar system) is considered a planet, regardless of how small. (So a chunk of rock the size ofa fist in a solar orbit is still considered a planet.)

A further distinction is made between major and minor planets. The major planets are the 9 (or 8) we all learn in grade school, while the remainder are considered minor planets.

Further complicating the definition is that some moons are actually more strongly attracted by the Sun than the planet they revolve around (example: the Earth's moon, some of the outermost moons of Jupiter, Saturn), so they could also be considered to be double planets sharing the same orbit around the sun. However, this isn't a significant factor in the case of Titan.

Thus by any way you want to slice it, Titan is classifed as a moon, not a planet. On the other hand, it's on the scale of a planet/large moon like ours, so it's appropriate to think of it as another planet you might be able to visit in the far future, if you'd like. I, for one, would like to buy some beachfront property on that methane lake.

Ahhh you are correct, it does belong to saturn, still given my memory I'm lucky I recalled it to be a gas covered moon.
L

GeeBot said:
Further complicating the definition is that some moons are actually more strongly attracted by the Sun than the planet they revolve around (example: the Earth's moon, some of the outermost moons of Jupiter, Saturn), so they could also be considered to be double planets sharing the same orbit around the sun. However, this isn't a significant factor in the case of Titan.
Click to expand...

Not really, the Moon and all of Jupiter moons are ina full orbit around their host planet. It's only that the Moon has a rather large mass compared to Earth and thus it doesn't directly orbit Earth, but Earth and Moon orbit around a shared center of gravity. The outer moons of Jupiter are full grade moons, but their orbits are eccentric and they will escape Jupiter sometime in the future.

That too. And if you would want to swim in there, it'd only be possible if you are made from stuff like aerogel or something.