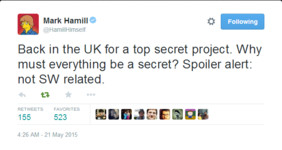 I forgot about that stretch goal promise. It would be really nice if it was Mark returning, even if only for a voice role or motion capture performance. And if it's not Mark, that's still pretty nice to have someone back from the old WC days, eventually.

Also, Hamill makes the most sense for a returning role given he's extensive experience as VA in TV and games and prominent role in the WC games.... Also increases the visibility of SC with Star Wars fans...assuming they all don't already know about SC at this point.

Love this guy. Imagine if Hamill and McDowell were in the game...

A real pity we can't have Eisen back as well.

As much as we might love the characters, much of the smaller roles in the WC series don't make sense to fulfil with this stretch goal. People would just feel cheated I think. McDowell, Tom Wilson would be good options as well. I wouldn't mind but I know most people would be disapointed if the only WC vets in the SQ42 cast were from Priv2 or the WC movie.
P

Huh... so THAT'S where Blair ended up after the wormhole collapsed.
D

So we just need EA to subcontract Roberts to make the next Wing Commander game, using the SC/S42 engine.

Then, during the conflict that would be known as the "3rd Nephilim confrontation", the bugs reveal they have Blair alive and well and that he made it out of that collapsing gate after all.

After rescuing him late in the game, he returns to your carrier long haired, gray and bearded, and totally deranged and spooked by the things the bugs have done.

Being Blair however, he wants to jump right back into a fighter and is immediately the best pilot in the Terran navy. Again.

Fingers crossed... Age doesn't matter when you are doing mocap and voice work, but even so, he'd be great as a more senior officer this time around. Either way, it would be fantastic to see Mark back in a CR game.