Help Save the 3D Kilrathi Fleet!

See, I wrote this fanfic with this super-fighter...

Just kidding - I need someone to help recreate in as much detail as possible three Kilrathi capital ships! During the war they were our feared enemies... but since then their 3D models have fallen into disrepair! Textures are missing, models are broken and... so forth.

These three projects are divided into three difficulty levels.

DEPOT - The Depot is missing... everything. All of her textures seem to be lost to the ages (3DS tells me they were 'CNBALL.CEL', 'PORT.CEL' and 'OUTBALL.CEL'). This project is a little more difficult because there aren't any great cutscene reference pictures of the depot - just the ingame bitmaps. I will provide those plus any reference work you might need (textures from other models, scan of the proper logo, etc.). You can get the Depot 3D model here.

FRALTHRA - The Fralthra, one of the finest Kilrathi capital ships, is... gone. The model I have seems to be a damaged or incomplete file. I have included in this zip the following 3D elements: the damaged Fralthra model (ANFRAL.3DS), seven textures found referenced in the text of said model (DORWNG1.CEL, RIDGETBS.CEL, RALTOP.CEL, RALBOT.CEL, RIGDETGS.CEL, RIGDETG.CEL and RIGDETB.CEL), six textures that 'seem' like they go with the Fralthra (FRALBOT.CEL, FRALENG.CEL, FRALENG2.CEL, FRALTOP.CEL, FRALTOP4.CEL and FRALTOP6.CEL) and last but not least the 3D model of the "blown up" Fralthra wing (untextured, but possibly a good reference point to build from?). Maybe you can restore something from the original model, maybe it's impossible - but we need to finish with a Fralthra model in the end! I will provide reference shots as needed as well as any other elements you think you might need (do the Ralari engines look like Fralthra engines? They're yours!). Get the scattered Fralthra elements here.

Now, the key here is to recreate these models as closely as possible... I know you're all wonderful artists, and I know that modern technology allows us to put a lot more detail into a spaceship than we could in 1990... but we don't need to add anything to them.

Prizes: CIC pens for everyone who helps, plus the online release of all the other four Kilrathi capital ship models (Ralatha, Kamekh, K'Tithrak Mang, Intro Dreadnought) when all three of these ships are finished!

I have reviewed all models:

Fralthi is a tough one... other two models are in a better shape.

I am wondering: do you want to keep wc1/2 cartoonish style or would you prefer a more realistic (and in my eyes better looking) one.

It appears that there are two ways: a complete retexture or creation of new maps. It depends on how you would like this ships to look like.

The choice is yours, but I strongly advocate to go over to wc3 style.

I want to keep the original style - the objective is to keep them in their original condition for historical purposes. After that, fan projects are welcome to use them for whatever they want (WC3-style textures and whatnot).

hmm... this might become a little bit diffucult... because someone has to draw cartoon textures then. I, personally, am not capable of doing that

anyway, how about reference shots?

Gonna get them when I'm back home (G) Happened to have the pit of 3D models with me at work today, but I didn't have any of the actual games to grab screenshots from.

ok, I will give the base a try... maps will be quite simple, if you want it to look similar to the WC2 version, just a use of generic Kilrathi maps.

Interesting fact: this models are animated (in order to make bitmaps for the in-game use, no doubts)
U

Just taken a look at the models and they surely look much better in 3D.
Well what about these "support" pics for getting a better idea?

About the Fraltha...hard to tell what the original model might have looked like but the debries are looking good ^_^

yeah, lars, models are surely looking good... but they could use an additional detail or too. No major changes, but smaller details here and there

Ok... Old thread, but I volunteer to do the Kilrathi supply depot. I am going to need reference pictures of the front, top, and side. Please use a WC BMP viewer.

Kevin Caccamo said:
Ok... Old thread, but I volunteer to do the Kilrathi supply depot. I am going to need reference pictures of the front, top, and side. Please use a WC BMP viewer.
Click to expand...

Oh... Never mind. I already did the textures.

Well, thanks Chrisreid, but I already got some reference pics of my own.

Here are the textures completed so far: 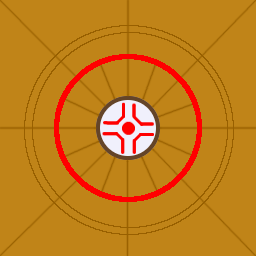 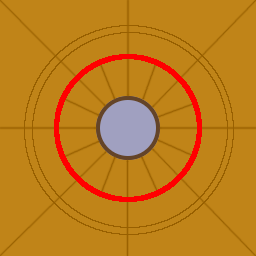 I have the port partially done, but it has the wrong logo.

Kevin Caccamo said:
Well, thanks Chrisreid, but I already got some reference pics of my own.

Here are the textures completed so far:

I have the port partially done, but it has the wrong logo.

Not to nitpick or anything, but I think that the cross shapes should be thicker.

@LOAF: Do you have the logo that goes there? 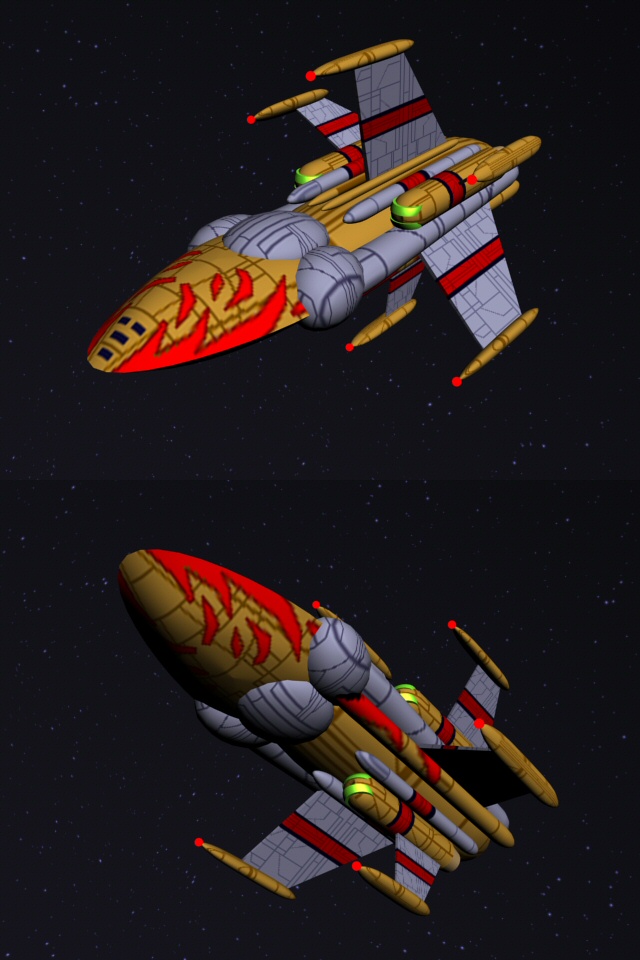 Here is the mostly complete Fralthra model. I have not added one thing that was not already present in some aspect of the WCII models (in fact, excluding the running lights, everything used is from the original Fralthra model). The textures are rather bright, but this appears to be an unavoidable consequence of exporting to .obj from .max. [At least, in this version. Presumably Autodesk has fixed this in their newest versions.] I had tried to export to .3ds, but problems emerged during the export process that I lacked the energy to solve.

This is not a replication; it is a reconstruction. The model, aside from the rear segment, which remains missing, is complete and the textures are the original ones; all that was necessary was to apply them (and thankfully, the mapping coordinates for them have remained intact.) I have done my best to repair this model, but quite frankly very little needed to be done, and were I perhaps more experienced, had tools closer to the original, I could have had an easier time of it; nevertheless, at this time, this is probably close to the best that can be hoped for this fine ship.

Any errors that may eventually appear will, of course, be my own. Thanks be to Origin for designing and building this, and all the other, models.

I don't know if this is wanted or welcomed - as a first step I resized and redid the front texture of the Fralthra, so the lines and ornaments look a lot nicer but still remain true to the original design - if this is wanted I could do this for the remaining textures too - have a look.

Personaly I like your work. I think it won't hurt to redo the rest in the same way.

much nicer. as cool as wing commander 2 ships are, the textures don't hold up to modern standards.
I