Halo 3 is out today!

Halo 3 is coming out today!
Any of you pre-ordered the game?
Did anyone went for the

I myself pre-ordered the Limited/Collector's Edition, eventhough I don't have an XBox 360 yet!

Personally I'm not a huge fan of Halo.

Now that I have a Xbox, I thought I should get the iconic game. But I will get Halo 3 only after I got Halo 1 and 2. And I will get those only when I have at least beaten one or two of the seven games I already have. And I am not near beating any of these games.

But I hope a friend of mine gets Halo 3.

TheFraix said:
Did anyone went for the

Yeah, it's awesome! I was shocked to get a box that's even larger than the box that actual XBoxes come in. 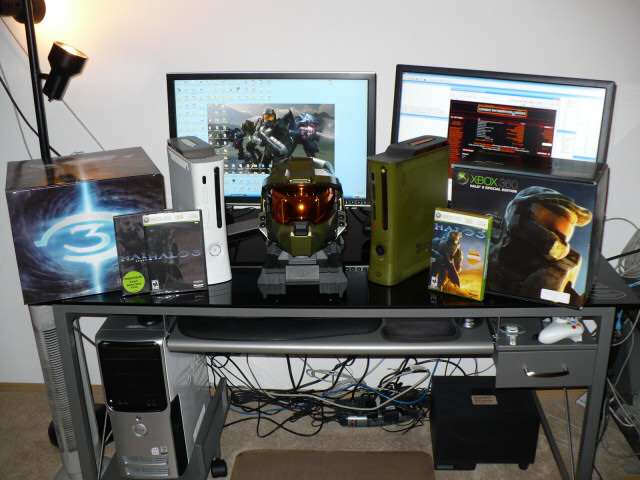 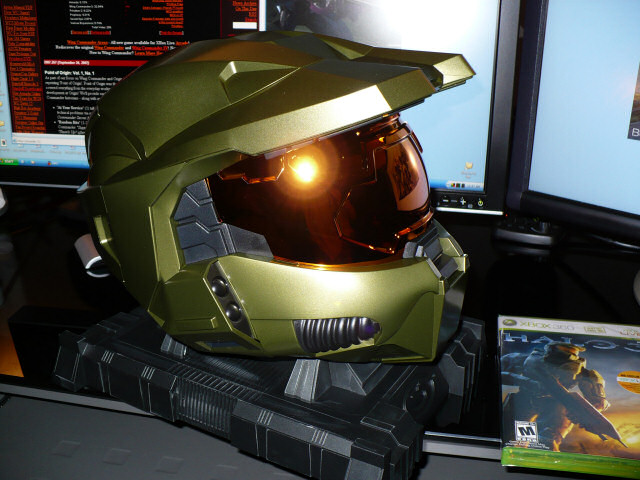 After it was announced and people were talking about how it wasn't life-sized, I was expecting it to be small, but it's not. If it were completely hollow, it might even fit me. The inside though is shaped to hold the three discs included in the set. It's fairly solid and the visor is reflective. And it looks pretty nice next to a Halo 3 XBox 360.
Last edited by a moderator: May 24, 2018
S

I had pre-ordered mine. Not sure what the point of that was though since I won't get it until the first week of October. Probably for the best though. I've too much homework this week plus an exam. When I do get it though.....well, it's obviously gonna be pretty great.

More importantly, today is the 92nd anniversary of The Battle of Loos.

Also, I will not ever understand the furor over Halo. It does many things and none of them particularly well.

(Chris - what kind of monitors do you have? Those are really nice.)

Well, Halo1 was nice, (I finished the single player campaign), even if the levels were ridiculously repetitive and confusing (I have an excellent sense of direction, but those alien ship and Library levels were completely convoluted).

Never played Halo2 because the PC port sucks (not a fault of the game), and many people were let down by the (lack of an) ending.

I know that 90% of the series' allure lies on the MP, anyway, so more power to you guys, I hope it's as good as you people expect!

The packaging sure looks extremely awesome.

I'll be playing TF2 for a while, anyhow, because it's so damn good.

Yeah I got myself a Legendary Edition at midnight last night! The helmet is HUGE!

I was kind of sad though that the helmet didn't fit the entire trilogy inside, you can get 3 discs in side it (the 2 bonus discs are in one case)

I've been a Bungie fan since 1994 and it's great to see yet another one of their trilogies complete.

well its out midnight tonight in the uk and im gunna be in line for it have it preorded even got the day off tomorrow!! been waiting for years for this the only ting i want more is another wc game!!!

I'm going to fork over the money for it (probably after xmas) so I can:

A few CICer's did some damage last night on Matchmaking. After work I'm going to go through the film and see if there are any "highlights"

No, you're going to spend another $400 to play Arena with everyone on the CIC

Hey chris! you've got the same 3 lamp light that I used to have! Man, I feel so cool...

LeHah said:
No, you're going to spend another $400 to play Arena with everyone on the CIC

I'd love to, it's just that XBox Live ain't available in my country (Indonesia). So, I'll guess I'll have to take a raincheck on that Arena thingie.

Fun so far, not overly impressed with single player, but having a blast online!

Pedro said:
Fun so far, not overly impressed with single player, but having a blast online!

Most reviews I've read so far rate the multiplayer as incredible. But the campaign as not so incredible. I got the chance to play the coop campaign today with my buddy and I personally thought it was a lot of fun. I was a little disappointed in the interaction between the Chief and the Arbiter (it just seemed like everyone in the intro would have more to say to one another), but it was neat that we could both play each character.

The level design seems just as consistent with the first two games. As in they're kind of repetitive. I'm still waiting for mine in the mail by the way. ~~~

TheFraix said:
I'd love to, it's just that XBox Live ain't available in my country (Indonesia). So, I'll guess I'll have to take a raincheck on that Arena thingie.
Click to expand...