I have some sad Wing Commander news to relate today. I just learned that Mary Bellis, an uncredited but essential part of the development of the original Wing Commander, passed away earlier this year. I don’t believe that most people know her story, so I thought I’d share it here by way of memorializing a woman most people probably didn’t know was a gaming pioneer.

A bit of technical background to set the stage: the original Wing Commander doesn’t store or display its ships using 3D polygon data, like most modern games. Companies like Spectrum Holobyte were starting to use polygons for their air combat games, but the result wasn’t especially attractive at the time: untextured geometric objects that left you wondering whether you were looking at a triangle or an F-16, a set of cubes or a tank and so on. Chris Roberts wanted more detail for Wing Commander’s immersive, ‘interactive movie’ atmosphere. During the R&D phase for his next big game (then called Squadron), Chris decided to forgo polygons and instead, inspired by Lucasarts’ Battlehawks 1942, create a system based on pre-set bitmap images. It took about two months of work, but the result was stunning for the time. Each ship was stored as a set of 37 pre-rendered image showing the craft from every possible direction. The game engine would then swap, rotate and scale sprites based on the players’ perspective, making it appear as though you could be smoothly maneuvering around a detailed object from any angle. It was this tech breakthrough that helped sell ‘Squadron’ to Origin’s executives at the time; it was quick, beautiful and like nothing else on the market!

With Wing Commander in production, the next challenge was creating all those ships! The ship building ‘pipeline’ on Wing Commander worked largely the same way it does on Star Citizen today. First, a concept artist, in this case Glen Johnson, created line art of the twenty odd ships required for the finished game. You may not know it, but you’ve seen much of this art before: with a couple exceptions, it was used in the Claw Marks manual (and some of those exceptions later appeared in a Computer Gaming World supplement.) From there, a powerful computer would be used to create 3D models of each ship, which would be turned into the hundreds of individual bitmaps needed. But there was one problem: no one at Origin in 1990 did 3D artwork.

Unlike companies today, Origin in 1990 didn’t have a large in-house production staff. It’s largely forgotten, but the company primarily published independent authors’ games at the time, taking a cut of the proceeds and letting the creators retain the rights to their properties. Those creators would set their own budgets, hire their own people and so on in addition to using resources provided by the company. Chris himself wasn’t an Origin employee until the day Wing Commander shipped! Wing Commander started life with just two artists on the team, neither of whom worked with 3D (not unexpected, since 3D art was in its infancy, and unheard of in games.) Chris opted to solve this problem by outsourcing the creation of the ship models and images to a company dedicated to such tasks. With that charge, producer Warren Spector reached out to a small company located in downtown New York City: Process Animation.

And that’s where Mary comes into the story! A tiny operation, Mary’s company Process Animation took on the task of creating Wing Commander’s now-beloved spacecraft. Working from Glen Johnson’s striking line art, she created a 3D model of each Wing Commander ship. Using a program called Sculpt 3D on her Amiga, Mary created the exceptionally (for the time) detailed, ray traced ship images you see in Wing Commander. The Hornet, the Rapier, the Dralthi… all created outside Origin, on an Amiga by a woman in New York City! Each image was done individual byte by byte, until the ships were ready for primetime. She delivered the individual motion frames and the 3D files to Origin on a budget, and those became the ships that most everyone here spent their youth’s flying and blowing up.

Mary isn’t credited in Wing Commander, but she created part of the game that can’t be forgotten (per her contract, Process Animation should have had a credit... but it doesn’t appear in the intro.) Looking at the individual Wing Commander bitmaps, each one is more than the sum of the concept art. There’s a distinct style that immediately sold you on the nascent Wing Commander universe, from the tantalizing glimpses of the Confederation and Kilrathi logos to the uniform color schemes (green and white camo for human ships, tan, yellow and red Kilrathi.) Like everything else in Wing Commander, Mary’s artwork hinted at a greater world that further brought you into the game.

I was lucky enough to get to chat with her in 2013, just as Star Citizen was taking hold. She was surprised anyone would be able to track her down, but was good enough to chat about the old days with me until both of our lives got in the way. She immediately struck me as a very kind person, and she was certainly happy to learn she was remembered and that her work was still appreciated. It goes without saying, but I was genuinely saddened to learn she passed away in March… an unsung hero of Wing Commander’s development, a talented artist and an outright good person. You can’t ask for much more of a legacy than that! So here’s to Mary, and to our always remembering the folks behind our favorite games.

Five of the 37 Hornet images created by Mary for Wing Commander I. 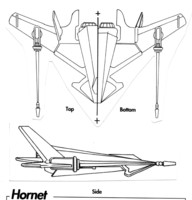 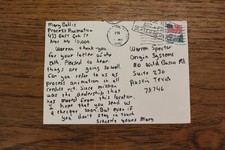 A VERY polite postcard ("I hope that you send us a cheque soon, but even if you don't stay in touch.") from Mary to producer Warren Spector. Part of the Warren Spector archive at the University of Texas at Austin. 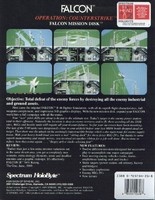 Battlehawks 1942, an inspiration that used a similar bitmap technology. 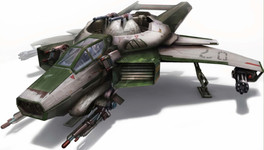 Star Citizen's Hornet, the great great grandson of the 3D model Mary rendered twenty five years ago. Note that the color scheme lives on today!​
(For anyone interested in the rest of the story, vis a vis 3D ships. Chris Roberts introduced Origin to Autodesk 3D Studio for Wing Commander II, training up traditional artists to build and render 3D ships in-house. This technology was used for Wing Commander II and several spinoffs. For Strike Commander, Chris revisited 3D polygons thanks to another technical breakthrough by another late, great artist, Mr. Paul Steed, that would allow them to be easily textured for additional detail.)

Until Space May Give Up Her Dead.

RIP Mary, thank you for helping to create worlds...

I feel like she needs to be honored somehow. Maybe as the fictional architect of the SC Hornet or something more prominent.
Last edited: Jun 3, 2015

So she had to do what many here have done here for fun since then - take those line-art drawings of the fighters and make them into 3D models (which was obviously took far more time and effort then than it did in the years since). That's a lovely story to hear despite the circumstances which prompted it to be made public. I have a feeling parts or all of it may have been shared before, but it's nice to be reminded of these wonderful contributions to the WC universe.

I agree. I'd love to see a "UEES Mary Bellis" or "Bellis Station" appear in Star Citizen.

Ben, thank you for the wonderful story of Mary Bellis' involvement in the creation of the ship images!

In the Wing Commander executable, I've replaced the text string 'John Watson' with 'Mary Bellis' at the end of the Artwork section of the credits. These are for your personal use. I have no intent of any other distribution.

EDIT: Ben, I am also saddened by the passing of John Watson.... having read the story about his time at Origin. Here is a second cut at including both John and Mary under the Artwork heading of the credits scroll. This one uses only the initial of the artist's first names.

Thank you! Sadly, John Watson is another Wing Commander artist lost too soon

https://www.wcnews.com/articles/johnwatson.shtml
Last edited by a moderator: May 24, 2018

Sad news. Thanks for sharing this.

To Mary, thanks for all your work!

I think it's great that LOAF had the opportunity to tell her before her death how much her work still meant for quite some people. So, also thanks to you LOAF.

Having dealt with amiga sculpt 3d, I have to say that her work is definitely impessive. It was a very dificult software to get good results, and I remember being frustrated by it multiple times.

More than just impressive work, anyone who has taken a good look at the ships blueprints and the ray trace results, you can see that there's much more than just simple vectorize and modelling work. There's real art personna in there. Something that resonated when one first saw the dralthi charging on...