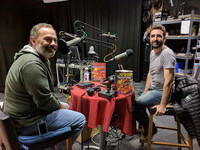 Fabien Sanglard has posted a great podcast interview with former Origin programmer Frank Savage. The main purpose of the conversation was to learn more about Strike Commander, but there's also wonderful information about Origin as a company, the technology of Wing Commander 3 and Mr. Savage's later work on Xbox. The whole recording close in at more than 70 minutes, but there's also a transcript you can skim to get the gist of it. Check it out here!

Frank Savage: So at that time I was a hobbyist game developer. I taught myself C and C++. My education was in Electrical Engineering. So I knew the mathematics behind 3D stuff, but I had never applied it. I never tried to do anything with it except for a couple of courses in college. I was a huge fan of the Wing Commander series. I had Wing Commander license plates on my car in Illinois where I was living in Chicago at the time. I would go to GenCon every year. GenCon was a game convention used to be held in Lake Geneva and Wisconsin and then eventually moved to downtown. Milwaukee, and that was where I first saw Wing Commander at GenCon the year before. I went and played Wing Commander every day literally every day when it released. Went to Gen Con the next year and they had this demo for this game that that I had never seen before called Strike Commander and watch the demo and saw like unbelievable graphics for that time. There was another person watching it with me a GenCon and we were laughing. Think about how like how if you can do this on a personal computer imagine what the simulators that we terrain people must must look like.

And I talk to Warren Spector who is who is there recruiting for origin at the time told him the story of how I played Wing Commander every day how I knew some of the mathematics behind this and taught myself C and C++ and he said, "Wow, you sound like someone we should hire because Strike Commander needs people to come work on it." And I said, well, okay like "I would love to get in the game is like this would be a dream job of mine." So I wrote a letter accompanying Warren back to Origin that had like my my experiences and you know the stuff that I've been doing with games and Warren told me he's like look, we're in the throes of shipping Wing Commander 2 right now. It probably won't won't come out we won't talk to you for some amount of time because the game is still about a month away and we're not sure. So I said okay, that's fine. Like I've got you know, I have a regular job that time.

I was working the IT department at a home improvement chain so you can see like how steeped in gaming I was at that point. I was a huge gamer, but I hadn't really done a lot of stuff professionally. Origin actually reached out to me that week and they were going to fly me down to Austin, Texas. I've never been to Austin in my life. And the last second they said well, here's what we're going to do. We're going to actually have you be interviewed by by one of the people on the team and over the phone. And then if that goes well then we'll think about what the next steps will be and there's probably gonna be three people talking to you that Friday night and I said, "Alright, that sounds great."
Click to expand...