Airplane Mode simulates being a passenger on a Transatlantic flight.
interview with Hosni Auji about his game
From the Steam page:
ABOUT THIS GAME
This is a game where you play as a window seat passenger for the real-time duration of a long-haul commercial flight across the Atlantic.

Airplane Mode's gameplay explores the airline travel experience down to every last detail—from the design of your seat and the seatback in front of you, to the contents of your carry-on bag and smartphone hard drive, to the behaviors of cabin crew and other passengers. The circumstances of your flight will change every time you play. Simply put, Airplane Mode is the most realistic flight simulation ever created. Sit back, relax, and enjoy.

Featuring:
From AMC Games, IFC, Bacronym, and the NYU Game Center Incubator.
*Crying baby not guaranteed on every flight.

But I thought that looked like the MAX winglets

The ones pictured here are just small wingtips that go up and down a bit:

The MAX winglets are 5+ times larger and go both upwards and out:

They don't just disrupt the wingtip vortices but actually add lift once the wings flex while airborne:

Maybe some assets were mixed for convenience/necessity?
W

ChrisReid said:
The ones pictured here are just small wingtips that go up and down a bit:
Click to expand...

That is funny. Its as if the modelers were looking at the wrong plane XD
W

But how do they simulate the cramped seating feeling? Or am I not allowed to play because my desk chair has more space than the real economy seat? Can you go to the bathroom and disturb everyone in your row? Does the seat in front recline on your legs? Kids bumping the back of your seat?

They've got all the rest of the stuff....

It may not be very fun to "play" but maybe that's part of the realism. In the interview Hosni Auji mentioned having anxiety about flying. Maybe this game could help some people with that?

This might look more appetizing than the real thing 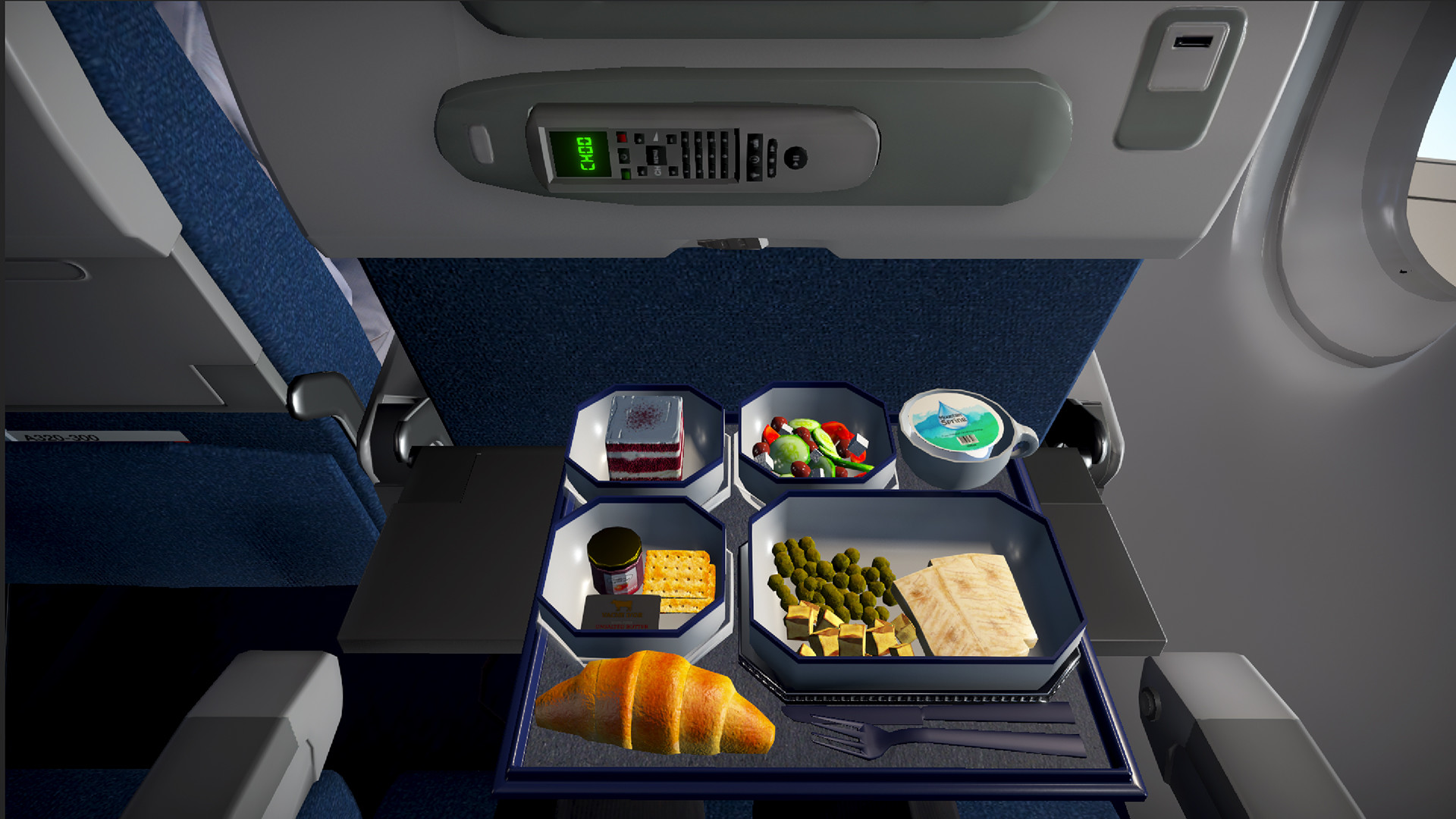 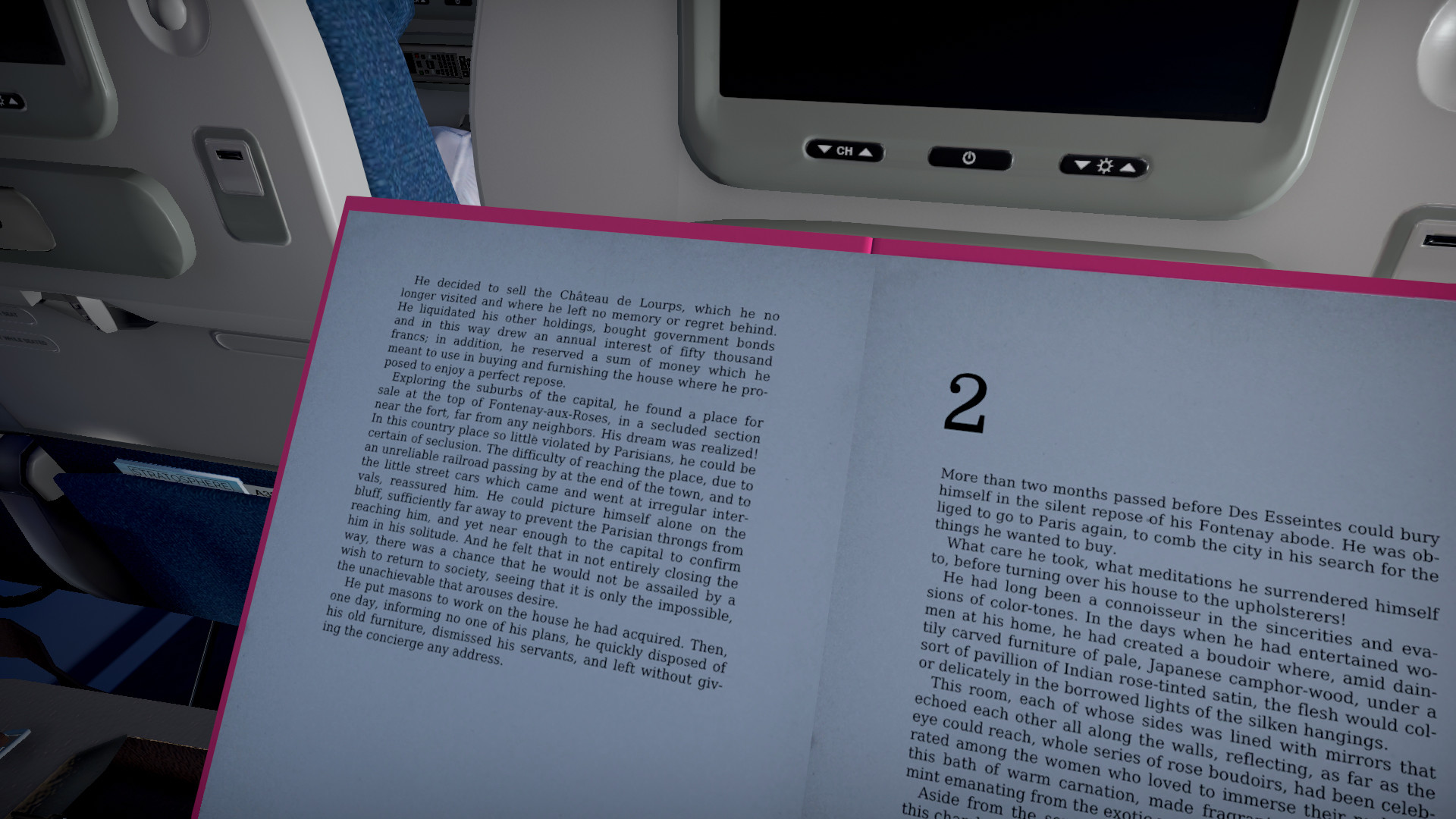 Wow. I'm so very torn on this.

A part of me wants to scream how cool this game is. What an awesome concept, what fun execution.

The other part of me wants to scream that this is the most idiotic thing ever. That about the only thing worse would be a simulation of painting a room - complete with having to watch the paint dry!

I don't think I need to explain the part of me that thinks this is stupid, I think that's completely self-explanatory. But why does the other part of me think it's so great? Is it just because it looks pretty enough, and seems executed well enough? No, no. There is something about the concept. Yes, it's stupid. Yes, there's nothing interesting whatsoever about sitting on a plane, and no, it's not cool because of the Inceptionesque idea of playing a game as entertainments, only to have to use in-game in-flight entertainment to entertain yourself. I mean, that might be cool if I was doing it while actually sitting on a plane, and playing the game to entertain myself, and having to use in-game in-flight entertainment to entertain myself while playing the game, but seriously...

I think what makes it cool and exciting is the fact that someone put all this effort into turning a commonplace and uninteresting experience into gameplay. It just makes your head race with ideas - what if this was not a whole game, but a part of a bigger game? An adventure game with a story, perhaps - or something else that doesn't even occur to me? What if there were actual goals to complete? What if these actual goals *didn't* involve killing terrorists, aliens, snakes, or whatever other opponent someone might conceive to put on a plane?

What if nobody even told you this - e.g., what if the winning condition involved you achieving something vis-a-vis one or several passengers (befriend them, get them to like you, help someone deal with some personal issue, whatever…)? And there you are, sitting and amusing yourself by checking out all the in-flight entertainment options the author had put in, only to discover later that by not talking to others, you missed 90% of the game content? Wouldn't that be amazing?

Getting back to my split love/hate opinion, as a game developer, I hate this game, because it's part of a silly fad to create "simulators" out of every experience, and the race seems to be to find the most boring experience to turn into a game. But also as a game developer, I love the courage of picking this sort of experience to turn into a game, and actually doing it with a rich array of features so that it doesn't end up being just another attempt to cash in on that silly fad. And I would so love for the developer to take it even further, so that this game ends up having genuine value as a unique gaming experience, rather than being a brave but ultimately boring novelty that everyone will forget after a few weeks.

wcnut said:
That is funny. Its as if the modelers were looking at the wrong plane XD
Click to expand...

There's very slight differences on the interior. It's not a perfect fit for either manufacturer, but the smooth pull down bins are 90% the same as Boeing uses. The Boeing ones have an oval vertical handle and these have a more squarish horizontal, but it's obvious what the artist used as a reference.

At first I was thinking that this INflight simulator was some kind of strange prank. Even if it turns out to be that, it seems well done. I'm not sure if I would play this game but I might be interested in seeing how far they took this concept.

They even made "postcards"/tickets to market the game! From Hosni Auji's twitter 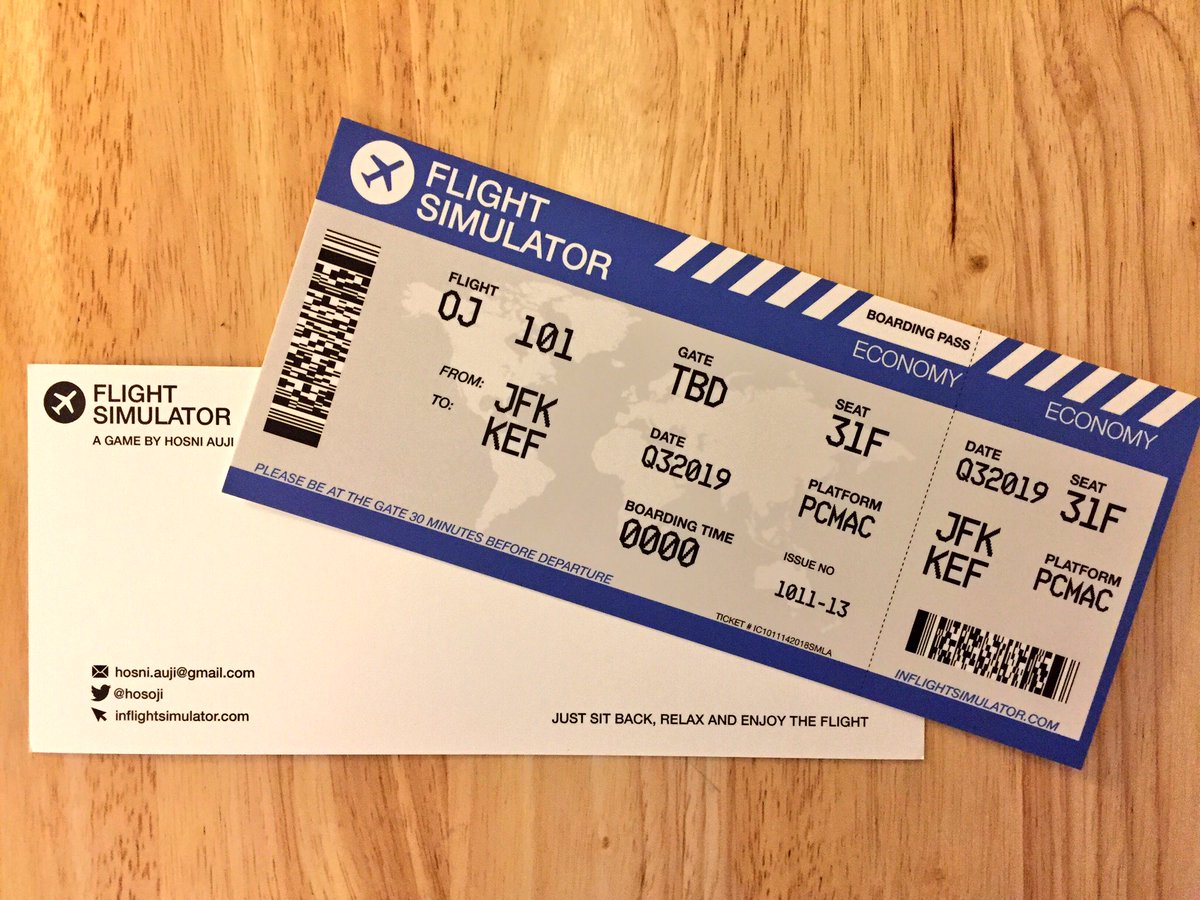 Now with flights to Halifax, Airplane Mode encourages players to sit back — but not too much, this is Coach after all — and experience the Zen-like routines of commercial flying. Expect delays.
Click to expand...

I think they need to add the airport experience as well. Including random TSA pat downs and lost luggage you have to claim at the end of the flight.

Nice, they should at least add the requirement to wear a mask, which slows your head turning and partially obscures your vision.

For everyone who loves, and misses, flying as much as we do: Airplane Mode is available October 15 on Steam, so wishlist now: https://store.steampowered.com/app/93...
Click to expand...