We have to drive all once in a while.

My fav. is an opel(or vauxhall in UK) Manta B;

To be clear, is this about cars users have actually rode in or drove, or just favorites, period?

Rode or drove.
A

But that's only because it's loaded with upgrades. Without the handling/tire upgrades, it handles like a damn shopping cart!

That, and I love Corvettes in real life, so I've spent a lot of time making a Z06 look like the upcoming ZR1, complete with the blower...
M


That, and I love Corvettes in real life, so I've spent a lot of time making a Z06 look like the upcoming ZR1, complete with the blower...
Click to expand...

90% of people who say they own a Ferrari are lying
Click to expand...

1959 Ford Galaxie covertable. Rode in one, want to buy one. Haven't yet found it.

But that's only because it's loaded with upgrades. Without the handling/tire upgrades, it handles like a damn shopping cart!

That, and I love Corvettes in real life, so I've spent a lot of time making a Z06 look like the upcoming ZR1, complete with the blower...
Click to expand...

Are corvettes really common in India or are you just a wierdo spammer?

I have three mainly because I've only really had four cars I could, kinda, call my own.
My number 1s would probably have to be the 1985 Dodge Charger Shelby that was handed down by my mom and the first car I actually purchased on my own, a 90s Jeep Wrangler soft top.
I put both at the top of my list because I loved them for very different. The Shelby

Charger was sleek and sexy while the Jeep had those nice child bearing hi.. er... was tough and powerful for such a small engine.

The Charger was a lot of fun to drive. Nice wide tires, a racing transmission, turbo, and a hell of alot more power than should be really be placed in a sixteen year old's hands. It was absolute crap in the snow* and, often time in the winter, I wondered if it might be possessed and attempting to murder me. On dry roads, however, it was amazzzzing. You could whip that thing around an intersection turn at forty-five miles per hour without so much as a squeal of the tires*.

My Jeep had the standard four cyclinder engine but me and my brother went offroading it never quit. Even when we were clearing out the ravine behind my house my Dad was able to pull a fifteen foot log up the slope with the parking brake on and everything.

So the offroading in the Jeep was awesome and I loved the speed and handling of that Charger.

Which leaves my current car: A 1998 Chevy S10. Another hand me down, between my and my brother we have beat the leaving hell out of that truck but it still runs as good as the day he bought it. If it wasn't for Obama's take over of GM I wouldn't think twice about buying a new Chevy truck. Oh well, maybe when I've got the money I'll be able to pick up an '06 or '07 diesel Silverado when it comes time to replace the S10.

Well, I dont have a driver licence (trouble with my right eye) but if Im forced to choose...

Why? Because one of my childtime hero's owns one in red with wing doors: Matt Trakker... 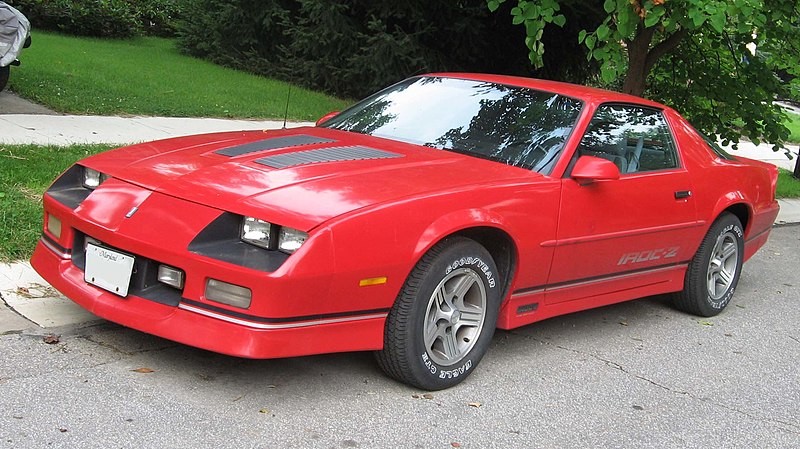 I've only owned two cars in my whole life. Some folks here seem to be rich beyond my wildest dreams, and own these pimped out sets of wheels that I couldn't even imagine myself having enough money to care about. However, I have driven lots of different cars, as my dad used to buy and flip classic cars (the way people flip houses), and he'd send me on shakedown spins after he performed some kind of fix on it to see how she handled.

Some favs that I can recall (these are not photos of his cars):

57 Chevy Bel Air:
http://www.universalautosalesandclassiccars.com/images/1957 Bel Air/57BelAirLeftSide.JPG
Never belonged to my dad. It belonged to my Uncle Bill, who loved it like his children. Drove it once, and it kind of drove like a lead sled, but it was still fun to drive.

Deacan said:
Well, I dont have a driver licence (trouble with my right eye) but if Im forced to choose...

Why? Because one of my childtime hero's owns one in red with wing doors: Matt Trakker...

I have an 87 Iroc... I think I've posted pictures of it on here before somewhere...That picture you have right there is an 88 or 89 maybe even a 90 (If I was able to see the dash)... Oddly enough they looked cool but from the factory didn't have the really high powered motor you think it would 5.0 was rated around 190 while the 5.7 was rated around 240. But with motor work or swapping out for a new motor...they haul A$$.

Also another thing with the F-body is that they are unibody.. and there is NO mid frame so there is alot of flex in the body...so it's a good idea to buy Subframe connectors or even make your own... Convertables never needed them because they came from the factory with them installed but the T-Top versions didn't...Neither did Hardtops... But it's not really an issue if you have a Hardtop but if you plan on keeping one for a long time... it's a good idea to have them installed...other than that once you get them running right....They are definitely a nice ride... My lil rant for the day

http://www.crius.net/zone/showthread.php?t=24779&page=2 Here's the other posting with pictures.

Still have it, needs a total ground up restoration.

My favorite car is your mom's car, 'cause that's where we do it.
S

'87 Grand National - my Uncle had one when I was a kid - I might pick one up someday, there's actually a beat-up Turbo-T for sale across town, I should go look at it, but I hear it needs some major mechanical repair....

If you could get your hands on a GTA... I would do it...They are a rarity. We worked on one doing the body work actually almost exact to your picture there. They are the Bees Knees. Even restored they can bring you in dough

On my way to court in a suit and a tie

Frosty said:
My favorite car is your mom's car, 'cause that's where we do it.
Click to expand...