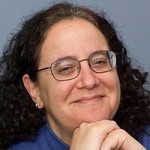 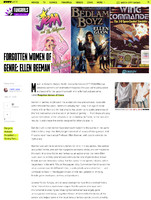 SyFy's Fan Grrls team has recently started up a neat feature called 'Forgotten Women of Genre', which highlights various science-fiction creators that have done great things behind the scenes or are otherwise under appreciated. Ellen Guon (now Beeman) was recently profiled for both her video game and writing credits. She's well known as the co-author of the Wing Commander Freedom Flight novel, but she also had a huge influence on the narrative style set forth in Secret Missions 2 as well as Wing Commander 2. In recent years, she's mentioned that she pitched allowing the WC2 player character to be male or female, but was shot down. She's currently a senior professor at the DigiPen Institute of Technology, but she has quite a history! Check out the audio article for a thorough rundown.


Beeman was writing in genre long before her stint in video games. She worked as a writer for the Jem and the Holograms animated series, and contributed to the realm of science fiction and fantasy as an author under the name Ellen Guon, even co-writing several books with another one of genre's best-known female authors: Mercedes Lackey. But her career in the games industry, which began back in the early '90s on the popular Wing Commander franchise and has since spanned over 40 different titles, is undoubtedly where she's had — and continues to have — the biggest impact on the next generation of rising female game developers, writers, and producers.
Click to expand...