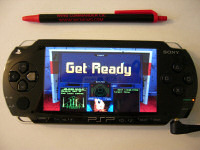 To follow up on last night's confirmation, here is the full text of Electronic Arts' official press release for EA Replay. In line with the newly revealed MSRP, Amazon.com has also just reduced its price to $19.95.

REDWOOD CITY, Calif.--(BUSINESS WIRE)--Sept. 1, 2006--Electronic Arts (NASDAQ:ERTS) announced today that it will release a compilation of EA games from the 90's exclusively for the PSP(R) (PlayStation(R) Portable) system under the EA(TM) brand. The game is under production in Vancouver, B.C. by EA Canada, EA's main hub for PSP development, and will ship to retailers November 7, 2006. Let EA bring you back to a simpler time when the dawn of gaming's golden age took hold. EA(TM) Replay is a throw back to what you loved about videogames in the first place.

"We're very excited to be offering PSP consumers an unprecedented glimpse into EA's past," said David McCarthy, executive producer on the project. "EA Replay is a rich compilation of classic EA IP that stays true to the original experiences, while offering modern gamers additional features geared towards on-the-go game play."

EA Replay promises to deliver a great console experience on-the-go for all 14 games including hit franchises such as the Strike series, Road Rash(TM), and Wing Commander(TM). Go head-to-head with friends in multiplayer on select titles, unlock original game art, and save your game at any point. Let the memories come rushing back and take the fun of the 90's wherever you go with EA Replay. The complete title list is as follows:


EA Replay will be available exclusively for the PSP system with an MSRP of $19.99. This game has not yet been rated by the ESRB. Media can find screen shots and a fact sheet at http://info.ea.com.
Click to expand...

My only gripe with this is that it's already been said (can't find the damn link) that the WC and Ultima titles will be console ports (SNES version for U7, at least).

HoustonDragon said:
My only gripe with this is that it's already been said (can't find the damn link) that the WC and Ultima titles will be console ports (SNES version for U7, at least).
Click to expand...

The Super Nintendo ports are great. They were done a good while after the PC versions and utilized the most advanced console graphics technology at the time. Because of cartridge memory limitations, a few things like the Jalthi model were changed, but on the other hand, we got other new things added. The Secret Missions on Super Nintendo has an entirely new intro cutscene that ads some neato stuff.

The automatic translation from HTML to forum code doesn't always handle the spacings and tables the same way.

I wonder if this has anything to do with what was said in the latest Official Playstation Magazine by EA about reviving some old Origin series.

I would guess that this has everything to do with such a statement.

I guess that I was just hoping this would include something "new". There still is that I guess

Do you have a copy of the article you referenced? That would be great for the news here.

More may be on the way.