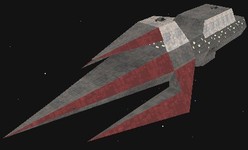 It's easy to find 'mistakes' in the ship stats published in Wing Commander manuals. The biggest reason for this is that physical manuals needed to be locked down for print before the final testing and balancing of the games would have been finished. Changes to ship stats to better balance gameplay are common, meaning that a booklet like Victory Streak gives a better look at how the team thought the game would work rather than how it actually does.

Case in point are the GIF listings for capital ships. The booklet lists turret counts for each one which often vary significantly from the final product... it even includes ships and installations that don't appear in any of the finished missions! We've gone through and tested all of the turrets in the PC version of Wing Commander III for this update. Feel free to pull out your Victory Streaks and compare!

For those curious, as the game never directly states: the red bolts are laser cannons, the gray bolts are tachyon guns and the yellow are anti-matter guns. In every case but two, Victory Streak lists the correct number of turrets but not the proper types. The first exception is the Kilrathi Heavy Destroyer (Ralaxath-class) which lists fourteen (11 lasers, 3 tachyon cannons) but actually has only eleven (10 lasers, 1 anti-matter gun.) The second is the Kilrathi Supply Depot, which has no armament in Victory Streak and six tachyon gun turrets in the game. Both faction's transports are listed correctly in the manual.

Victory Streak lists specifications for a Kilrathi starbase and a Confederation frigate which do not appear in-game. The frigate was intended to be Paladin's flagship; in the finished game, it is replaced by a destroyer labeled frigate. The frigate model can be found hidden in the game's files where it appears to be missing one of the three laser cannons mentioned in Victory Streak.

Finally, there is the case of CapShip Missiles. CSMs are not assigned to ships in every mission; instead, they are scripted only for particular missions where they usually serve a direct purpose (either to destroy a target for the player or to serve as objects to shoot down.) In the cases where they are listed, they should be considered the minimum number rather than the authoritative total.

Tune in next time for a guide to the capital ship turrets in Wing Commander IV!