John Cordell and the Gemini Gold team has been working on a higher resolution version of the Grayson Burrows talking head. He's interested in feedback on the results so far. The original is on the left and new face is on the right. Do you think the new art is cool or creepy? Hit Discuss link below and let him know! 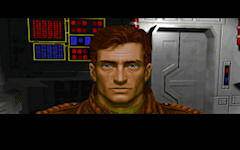 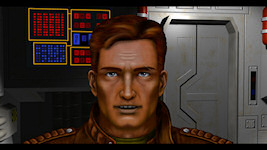 If it's feedback you're after I'd say this is an outstanding remake of Burrows. Far better than I would have expected. Some great work there John!

I do agree on the vertical stretch that Madman mentions. I hope you don't mind - I did a very quick and nasty photoshop job to show what I think would improve the character.

Basically, I reduced his forehead and nose, making his whole face "shorter".

Just a suggestion. Either way, like I said, that is some excellent work. Exceptionally true to the original artwork. Love you work mate. :thumb:

You know...Staring at the original reference a little more, I wonder...I think part of what makes Burrows look so unique is the pronounced ovoid shape of his eyes. Although they are thin (ie their "height" for want of a better term), they are quite "wide". I don't think this remake quite captures that at the moment.
M

I think with a little less red and a little more yellow to the tone, some of the 'over-sharpening' of the features would be alleviated. And I agree, the original's eyes were more rectangular in aspect.

Funny, this Burrows looks a lot older than the original. Or is it just me, a couple of years later?
There definitely is something about the eyes - the ones in the original pic also had bigger irises.

Hoenstly: Great job, Gemini folks. He may not be exactly the same guy, but the features are more the ones of a serious professional than of a fly-by-night hotshot. Good choice for a game.
F

Part of me really likes the new one, but there is something about the old one (the whole scene I guess) that looks a bit better with it's original 'muddied' graphics. IMO privateer gfx should not be even slightly clean.

I was terrified by the thumbnail at first, but after looking at the full image, I don't think it's that bad. I think c0mc0's adjustments are an improvement, and indeed, the eyes could be made to look more like the reference. I also don' think that the chin should have such a huge indent in the middle.

There is no vertical stretch, the reference has just the wrong aspect ratio, since 320x200 != 4:3. Scale the reference up and they will match quite nicely with the remake.

Interesting feedback so far.
I guess the only other interpretation of Burrows is an early concept art where Burrows looks more ruthless:

If you want feedback ... well I think the face is a bit too slim. Stetch it a very little bit more to the left and right. But just a very little...

But I think the biggest problem is the nose. Try to increase the size a bit and don't use the hard lines in the middle of the nasal bone. Don't know if it's called like this in English.

Here I made a very quick and dirty draft based on the top image and you'd know what I mean. Sure this is not perfect it just should show what I mean:

and you should make the eyes a bit larger and stretch them more to right and left. Especially to the ears of the face.

Just like I said... you wanted feedback... but overall very good work!

Hey, this is a pretty awesome idea. And it's certainly already better than what I would be able to come up with. Now onto the nitpicking, since you asked for it!

Eder said:
- Aside from that, the teeth don't look particularly convincing.
Click to expand...

I would say this particular shot with the mouth open isn't the most flattering. Burrows has a good closed-mouth grin/smirk/look to him normally. The slightly-open mouth-breathing mouth is a little off. Other people have talked about the eyes, so I won't go into that much aside from saying they combine with the mouth to give him a little bit of a creepy guy look compared to the original.
F

Hmmmm, I might make some Wc characters for GH world tour

I saw this and it reminded me of the drawings for the characters from "Wings of Glory". He looks a lot like the player character from that game.

I think the nose is different, the way the original seems to point down and the new one looks more head on or up.

Also the bags under the eyes are not as visible and could be why the eyes look different.

It's a great start, but when did Grayson start going tanning?

He probably started tanning...ohhhh about the time he started fixing the reactor.

hehe, a thousand different starship variants, many of which are totally unlike the originals,(some created by myself too) and the accuracy debate is sparked by Grayson Burrows' face

Looks good but first thing that caught my eye and see others mentioned as well, the eye's just don't seem quite right. The bags under his eyes look much heavier in the original, as if he was someone who for years spent long days and nights flying on the seat of his chair.

Also since the still is taken with his mouth open revealing his teath in a hint of a smile also seems to make him look more happy then the original with the mouth completely closed.

So sayeth the self proclaimed interstellar art critic. Tho anything is better than 320x200