The Amazon product page for EA Replay has been updated with box art. Out of 14 titles, just five are shown on the front cover... and Wing Commander is given top billing! The small print seems to read "14 HOT CLASSICS ONE COOL COLLECTION." Check it out! 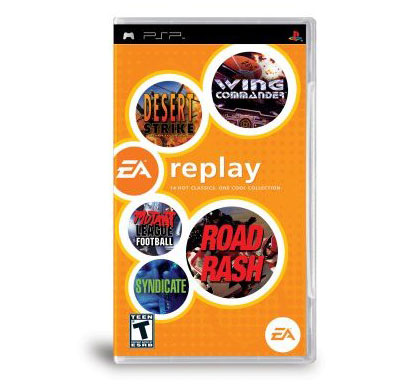 Looks great. Wing Commander not only the top spot but is the one that stands out.

And Syndicate on the PSP sounds fun too.

Yeah, I've never played most of the games in that set, and a few of them I'd really like to try. It really is tremendous that Wing Commander didn't just get a little listing on the box somewhere, but actually got a nice big classic logo right there. I expected all or none of the fourteen games to get little representations on the front, but it's clear that EA believes some series are particularly eye-catching instead.
C

I've played all the games in that frame, I enjoyed Wing Commander the most (duh) and Road Rash the second most. Desert Strike is kind of a 3rd person perspective shooter where you fly around a helicopter. Syndicate is a 3rd person perspective MOB type game in a futuristic setting where you go around doing jobs as a syndicate, it was made by Bullfrog, pretty good game as well. Road Rash was fun because you got a basic motorbike and your fists and you race with others and kick them off their bikes, get chains and bats to hit them off, and other tahn that you're racing like a mad man.

Good stuff. I am looking forward to EA Replay.

**All the games except Mutant League Football
I