Since a lot of people will probably end up flying to Atlanta for D*C, what could be more useful than a guide to Atlanta airport?

I find it especially accurate since I not only have a stop in Atlanta on my way to Seattle (as the article said would happen), but I'll also be flying from Atlanta to London. Also I'll be flying Delta.

If that article isn't a sign that my trip will go horribly wrong, I don't know what is.

Crud, I'm driving down -- I don't get to go to the Atlanta Airport this year

Which is a shame because (no matter what that article says) Atlanta has the awesomest airport ever. Giant plexiglass ants and a rocket train? Sign me up!
T

Hey my hometown airport (Pittsburgh) is rated in the top 10 best and nicest airports, so there.

Unfortunately I'm inclined to agree more with the Article than LOAF. I mean, the Delta ticket counter is exposed to open air. The lack of air conditioning is one thing, but the horde of incoming locusts really gets annoying while you're snaking through miles of line. And if you make it through baggage claim, you get to delve deep into the dungeons of the MARTA transit system. Good think I'll have a bodyguard this year. 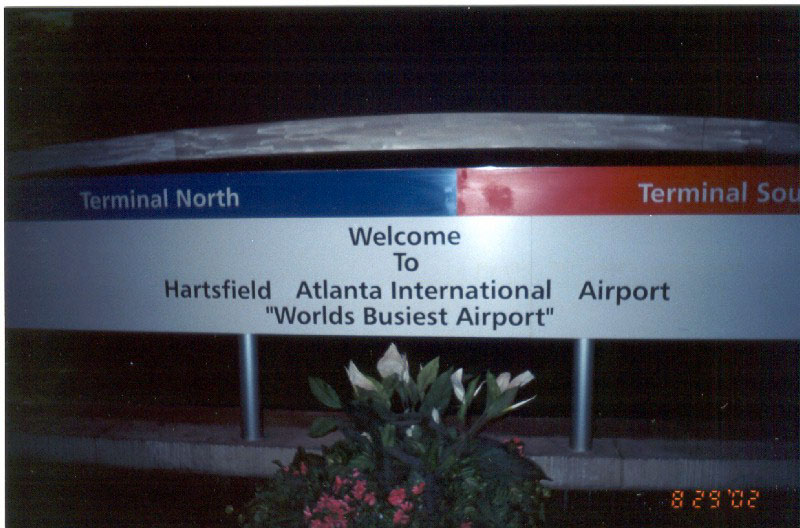 Originally posted by Bandit LOAF
Crud, I'm driving down -- I don't get to go to the Atlanta Airport this year

That's no reason to not visit the airport

Originally posted by Bandit LOAF
Anyone who doesn't love the Atlanta airport has never flown out of Houston -- now *there's* an awful airport (G)
Click to expand...

And you've clearly never had the pleasure of flying into or out of the Kansas City "International" Airport. The design is interesting, each terminal is a sort of 3/4 circle with the tramac on the outside edge, parking on the inside edge. Unfortunately inside it's a complete mess. There's not a clear flow, such as park->check bags->security->travel to gate->board plane. It's more of a park, wander around the circle until you find your counter, wander back around the circle until you find your gate, pass through the security inlet into the plexiglass walled area protecting the gate. Then go back through security if you want to pee, get a book, whatever.

Even with the relatively low passenger flow, it's a crowded and confusing little nightmare. Hartsfield is annoying at worst, aside from the cool trains. In Vegas it's pretty much a casino with a landing strip outside. But if you want a cool, well done airport, try Denver. Wide open, well labeled, and attractively constructed. Mmm.

Originally posted by Bandit LOAF
Anyone who doesn't love the Atlanta airport has never flown out of Houston -- now *there's* an awful airport (G)
Click to expand...

Nope... I was in Dallas/Fort Worth on my way to the Movie Premiere.. Somehow they gave us like a minute and a half to run 30 gates to our connecting flight.. but what little I raced past looked nice.

Houston wasn't so much badly organized as it was painful to exist inside of... it has kind of a "what the future was going to be like circa 1960" motif, which includes very bright lights, off-white plastic molded everything and walls/desks/etc. made of glass cubes containing red neon lights.

Also, instead of news stands, it had old ladies with carts who charged four bucks for a soda and five bucks for a little bag of whitey bites. Damn you, Houston.

The new Austin international airport is pretty great, though (not the one you flew into, Chris -- they made a new one just after that). The terminal is a big, un-confusing open space... sort of reminds me of the generic agricultural/refinery bases in Privateer. And they have ice cream that tastes like rubber, but not in a bad way.

The new Austin international airport is pretty great, though (not the one you flew into, Chris -- they made a new one just after that). The terminal is a big, un-confusing open space... sort of reminds me of the generic agricultural/refinery bases in Privateer. And they have ice cream that tastes like rubber, but not in a bad way.
Click to expand...

Yeah, too bad I missed it.. Probably wouldn't need to make a transfer flying to Austin nowdays.

Hmm, do me a favor and take a picture of the giant plexiglass ants when you're there -- they're in the baggage claim terminal.

There's two Houston airports, the main one (George Bush International), and Hobby Airport. You are right, the George Bush Airport is pure and utter crap.
D

None of those airports can beat flying into the airport in London. Hethrow or soemthing spelled like that. Its the biggest place I have ever flown to. You have to take a 20 min bus to get to the next terminal and there is 4 of those and then you got to worry about not understanding the gate person becuase they are speaking with a British accent which is so difficult to understand. Lets just say i had a difficult time ordering at burger king there.

Ehh, Heathrow is mildly daunting the first time you're there, but it's actually a remarkably easy airport to get around in. I hate it anyway, but only because I've had to wait there for six hours or more on several occasions. Mind you, if you have trouble understanding British accents, then I can see why you'd find it difficult

I was watching some random US TV show, and they subtitled Prince William... How can people have difficulty understanding most English people? I mean, I can understand, to a degree, crazy Welsh people, and definitely some Scots, but not the English...

Yeah, Prince William is easy to understand. It's the localized British accents that people are likely to have trouble with.. cockney, scouse, etc. Oh, and also immigrants who speak with really weird accents. They have been known to subtitle Scots here too actually.

This reminds me of a scene in Austin Powers 3 where they were mocking the British speak by useing a lot of British slang and used that as the British language. Ridiculous.

So, what is it like at these conventions? What a pity I will probably have to wait until-what-after 2004 to be there. Yet, only if I am interested in going.
W

Well, I would just like to know what goes on every year-to see if it would be worth it to take the long drive up to Atlanta for the Convention-which I think it was in Atlanta I don't remember where I read that cause I may have misinterrupted.
W