In addition to being an extremely talented artist, Howard Day is a man who knows his explosions! Wing Commander II has two sets of 'ship killed' sprites, one for fighters and one for capital ships. As it turns out, both of them were taken straight from the Endor battle in the third Star Wars film, Return of the Jedi. The explosions were likely traced from a home video release (at the time, a tape, laserdisc or CED) and then colored in Wing Commander II's pallete. As they say, great artists steal...

The fighter explosion is taken from a scene in which a crippled TIE Fighter crashes into the superstructure of a Star Destroyer: 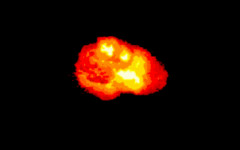 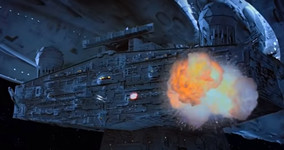 The capital ship explosion is taken from a sequence in which the Death Star superlaser destroys a Mon Calamari cruiser. The explosion was rotated horizontally for Wing Commander II (the Star Wars screen has been mirrored for comparison purposes)[/i]: 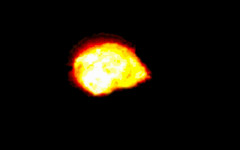 Oh wow, well spotted! The capital ship explosion, I still remember getting sufficient expanded memory for WC2 to work with all the bonus features and the capital ship explosion was so smooth and pretty (especially satisfying as it was due to a torpedo run or two). I wonder how difficult it was to manually animate each frame in WC2's palette during the day. Maybe not difficult, just tedious.

Probably not too crazy, each explosion has 15-20 frames of art, total. I think the real challenge at the time would have been digitizing the footage in the first place.
H

Now you're just showing off!

And also proving why they didn't have rapid-fire lasers in Star Wars: Unshielded TIE fighters wouldn't have lasted seconds against an X-Wing's quad!
H

And something a biiiit different.