Due to a bug involving missile launchers this Kilrathi tank and Confederation frigate were cut from Wing Commander III. The frigate would be resurrected for WC4! 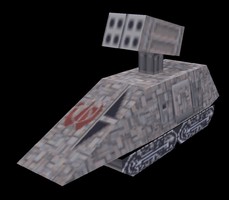 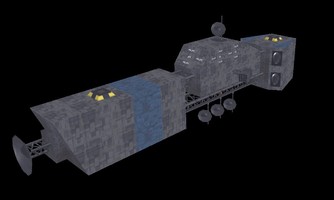 That's why they call them missiles. They always miss!
Click to expand...

Do we know which missions/locations these craft were meant to be deployed in?

The missile tanks would've obviously appeared alongside the laser tanks in the various ground missions. The frigate isn't as clear... it was replaced by destroyers (the ship that delivers Paladin is a destroyer labeled frigate) but it's not clear if that means one of the Victory's escort destroyers would've been a frigate or not.

On that note, what is the canon armament for the frigate? Looking at the model, there are four mounts for laser turrets and two missile launchers? Any ideas what it was supposed to fire?

The versions in Wing Commander IV had four laser turrets... the missile turrets are still visible on them but they aren't hooked up in the game. (They do file CSMs when scripted in missions though!)
D

If you want to see it fly and fight, you can use the Wing Commander 3 Mission creator written some years ago by @HCl to set up a battle involving any of the craft in WC3, including the Frigate! I could well be remembering this incorrectly but I have a feeling it fires lots of missiles in combat.
You must log in or register to reply here.
Share:
Twitter Reddit Pinterest Tumblr WhatsApp Email Share Link
Top