Even if it's not a "true" WC game in the sense of not being official, Standoff has and Pioneer promises to deliver on the same sense of awe that we all felt when we first played the original games.
B

Howard: question for you. I had the first face-on image you posted as my wallpaper for a few days, then when the second one came out I noticed some slight differences. I know the front view camera angle is different in both shots, but it seems to me that the overall width of the front of the craft is slightly narrower in the first shot. (in relation to the size of the cockpit glass and the turrets behind it.)

Did you change the dimensions at all or is this purely an optical illusion with the change in camera angles?

Looks really really nice.
Just a few things - looking at the images from the game, I think that the element around the canopy (I don't know what word to use for description, it's not just the cockpit... the part that flares sort of like the cobra's head) is too massive. also it slopes up behind the canopy, towards the engines. Looking at the images from the game, the paneling suggests to me that this is more integrated with the canopy, and forms sort of a 'neck' there. As it is now, the FOV from the cockpit would be pretty pathetic.
I overlayed your model on the in-game image, and it appears that this is the only part that doesn't match. I threw together a very basic model in LW to show you what I am talking about.
One other thing, I also think some of the detailing on your model is too random and too small - I know this is intended to give the sense of scale - but on real world objects the panels tend to follow the underlying construction (see the attached f-14 images). This is most visible on the lower intakes, where the panel lines go every which way, regardles of the intake shape.
As far as I can see, you are using at least two layers for surface detailing - larger panel lines which for most part look really cool, and smaller detail greebles which are supposed to give us the sense of scale - these are too small in my opinion, and make the ship look like it's covered with bathroom tiles (well, OK, the space shuttle is covered with something similar, but that doesn't work like armor.. =)
I think weathering would work better.
Now please don't take this the wrong way, I know I am splitting hairs here.
Your work is beautiful, that's why I am commenting on it. =)

Well, it all depends on the reference you use.
If you have a look at THIS model, which is the original used for Privateer, it seems Howard already made the transition more fluent, the original "neck"is much wider.

Bar-None: Yeah, that's the difference between a Orthographic and a Perspective camera.
Vorkosigan: Wow, that's a lot of stuff.... And a couple of good ideas indeed!
I'll fix the paneling around the lower engine intakes - to be honest, that's always kind of bugged me anyway, and I should have changed it sooner.
As for the width of the forward fusalage, that's not going to change. We have plenty of reference that shows that it is indeed that massive, and that the overall shape is not at all like the model you put together. 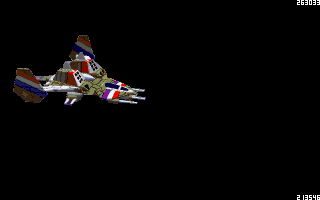 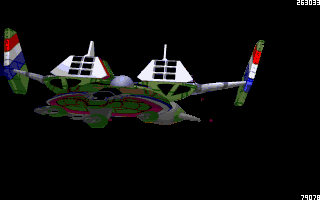 However, you are correct in that the angle of the area behind the cockpit is too steep. I believe I have fixed that particular issue.
As for the very tiny panels, I think what you're seeing there is the pattern of rivets that's all over the ship. That sort of detail is supposed to emulate the rivet detail visible in shots like this:

It may currently be too visible, but that detail is going to stay in.

The model is as always totally awesome, and as always, I have some minor criticism.

-From some angles, the turrets look like the barrels 'hang' a bit. I'm sure its hardly even noticable ingame, but they seem slightly less menacing than they would if they were fully erect and ready for action.

-The glowy bits on the wings. I realize there's all sorts of real life military vehicles with all sorts of electronic goodness hanging outside the armor, but it makes the broadsword, the flying fortress of WC look a little frail. Same deal as with my warship window citicism earlier, more of a personal preference, really.

Neither are a big deal, just throwing them out there.
V

"Forward fuselage"... yeah, those are the words I was searching for... =)
Yeah, you are right, I did model the area behind the cockpit too thin... I was working only from the side view... and it was the slope of the area behind the cockpit that was bothering me. It was only a minor nitpick anyway. The intakes look nice in the update.
Can't wait to see the ship with the paintjob. =)
I can't remember the last time I modeled something just for fun, so I kinda envy you... =)

Dyret said:
-From some angles, the turrets look like the barrels 'hang' a bit. I'm sure its hardly even noticable ingame, but they seem slightly less menacing than they would if they were fully erect and ready for action.
Click to expand...

For the love of god, i couldn't come up with a joke that could do justice to that paragraph (although a LOT were on my mind). And yeah, they point down a little.

Red Baron said:
For the love of god, i couldn't come up with a joke that could do justice to that paragraph (although a LOT were on my mind). And yeah, they point down a little.
Click to expand...

Hah, yeah, I thought the same thing, but for whatever reason I couldn't come up with a better way to phrase it.
B

And thanks for answering my question!
I'm not very camera-angle savvy, but that first viewpoint looks MEAN! I hope you'll duplicate it when all is finished.
H

Mr. Day, you have once again done an amazing job. Your models, especially the 'Claw, remind me of the first time I saw the Enterprise in ST: TMP. The little details convince your mind that this is a real physical object. You can really grasp the size of it.

I am going to, however, needle you again for that Beauty shot of the Claw with her name and hull number on the conning tower with a nice starfield background.

If there is anything I can do to help with that inspiration to do the Concordia, say a years worth of free pizza, just say the word. I may have to kill to make it happen, but happen it will!

Honestly I have to say that I never liked the Broadsword. It looked fat and clumsy, not a real beauty compared to the other ships of WC2.
The only thing I loved when I had to fly with it was the incredible firepower of the 3 Mass Driver cannons. I kicked lots of Kilrathi asses with them

Great work again, Howard. The model looks massive and dangerous now - exactly how it should be for a bomber. Looking forward to seeing the finished model - and maybe one or two animations where we can see it in action?

Wedge009 said:
The sheer size of the Broadsword compared with the regular fighters is evident even in the original screenshots. "Beast" really is quite an apt term for it.

Is the rear landing gear hidden from that image or did they put it in a different location then Howard's model?

Not a big deal but I noticed part of the front landing gear poking out near the hinge of the rear panel about 3 seconds into the clip.
I think if you delay the closing of the rear panel it wouldn't show anymore.
H

TCS-Concordia: Right, right... the Tiger's Claw. I still have that on my to-do list. Sorry, I've not gotten to it yet, but it's a fairly long to-do list. And the Concordia is pretty far down that list as well, I'm afraid.
Death Angel: Thanks. With any luck, yeah, you'll see it in some action.
Michelle D: That picture baffled me as well. the only thing I can think is that they omitted the landing gear in that one shot. Good eye on that landing gear clippage in that animation...gonna get that fixed pronto.

I may go back and add more detail in the cockpit, but it's not something that the paint scheme deals with, so I can safely ignore the issues and go back and fix'em later.

Death Angel said:
Honestly I have to say that I never liked the Broadsword. It looked fat and clumsy, not a real beauty compared to the other ships of WC2.
The only thing I loved when I had to fly with it was the incredible firepower of the 3 Mass Driver cannons. I kicked lots of Kilrathi asses with them

What I liked was that, in comparison to the attack power of your opponents, it was the best-protected ship you get to fly in the whole series. The Devastator has more shields and armor, but your enemies are tougher than the WC2 enemies as well. Really, the only glaring weakness of the Broadsword IMO was that Drakhris had both the speed to stay out of your mass driver range and the long range lasers to shoot at you while remaining outside of said range--i.e. they could shoot you and you can't shoot back.

@Ijuin:
You're right. The poor maneuverability and the lack of an afterburner made the dogfights against the fast light fighters really tricky. Because of that it was a relief to sit in the best-protected ship of WC2.
B