Another Question: Did you make the Gettysburg Class Heavy Cruiser too for Pioneer? The Ship was build about 2640.

I only know about the old Modell from Lynx but the Saga Team says that this ship is not used for Saga. I really like the Style of this Ship. Looks like a old WW2 Battleship

Would be nice if i see it in Pioneer 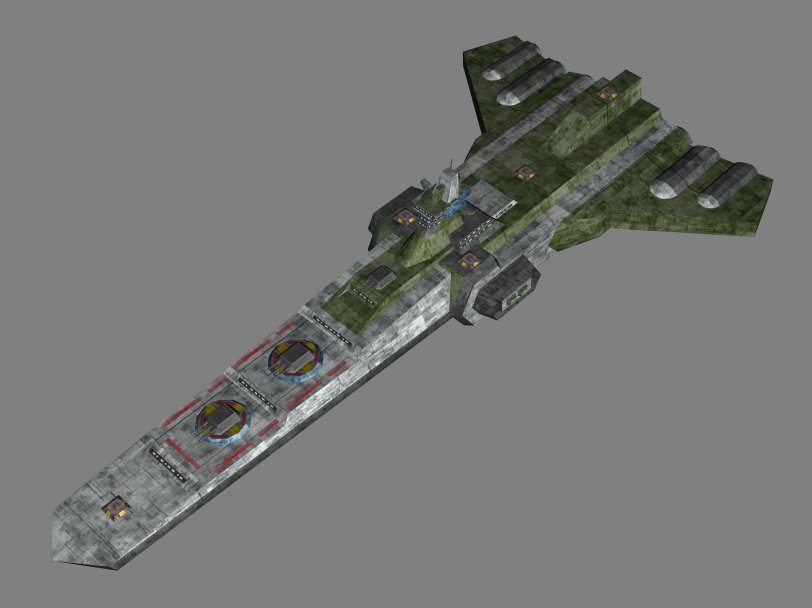 Looks like an Exeter and the Bengal had a baby.

OO! I know what I'm making with LEGOs now!
B

I kid because I love

Vinman said:
I kid because I love

Neither of these ships has had a keel.
P

Any chance of seeing a render of an unnamed pilot entering the belly of the beast, for scale?
O

well, my first thought was HOLY S**T. youve got some serious talent howard. ive been watching this from the wings for a while and i am chomping at the bit to get a taste of this game .. it will be the first TRUE new wing commander game in what seems like forever. keep up the incredible work.

Masterful model and render of one ugly ship! And of course, I mean that in the fondest way possible. Sucker looks solid, and the details do a great job of conveying scale.

Oh - and maybe it's a trick of the scale but... it looks like the landing gear might not be sufficiently tall to allow clearance for those colossal mass drivers. Them's crazy huge mean-lookin' mass drivers. I half expect those things to be shooting Ferrets or something.
D

I am 1,75m high, so if I standing right beside the front landing... We will share nearly the same size.
Or, to put it simple, I could walk directly under this little monster even without hitting my head on it...

Thats just fantastic work... and now I want my own Broadsword for my desk!
D

I mean: landing GEAR... standing besides the front landing gear...

onecrazymofo said:
it will be the first TRUE new wing commander game in what seems like forever. keep up the incredible work.
Click to expand...

Howard knows that, and so does everyone here, including the teams behind Standoff, Saga, Unknown Enemy, Pioneer, and the other fan projects.

Howard knows that, and so does everyone here, including the teams behind Standoff, Saga, Unknown Enemy, Pioneer, and the other fan projects.
Click to expand...

By that logic, Wing Commander II wasn't a true wing commander game because it needed WC1 to exist. WC4 is built on WC3's engine, so it can't have existed without that.

I actually agree with the original statement. Standoff is just as well put together as any officially released WC game. You can't even tell that it was based on top of Secret Ops in the first place if nobody had told you first. And if Howard and Joel release Pioneer, it too will be a true Wing Commander game. The amount of dedication and love put into such games makes them that, not the fact that they were or were not sold on store shelves.

The sheer size of the Broadsword compared with the regular fighters is evident even in the original screenshots. "Beast" really is quite an apt term for it.

Great work, as always, Howard. It certainly does show off the shear size of her, far better than I've ever seen.

How are you envisaging this interchangeable texturing will work? Some sort of in-game alpha mapping or masking etc? I guess whatever technique is used in RTS games to differentiate sides in multiplayer matches would probably work well here...

I must admit, I'm not a huge fan of the turret barrels. They look a little...far at the moment. They tend to lack detail and give the design a bit of a "cartoony" look right now - Of course, the WC2 ships all looked "cartoony" so that's not surprising but just tends to take away from the otherwise more "realistic" looking design - IMHO. Would the turrets use your interchangeable weapons components anyway? IE - you could put mass drivers or whatever you wanted on the turrets? I thought that's how you had set up all the other Pioneer ships so far...

BTW - On those turrets - Were they always ball turrets in the original designs or have you interpreted them that way? I always pictured them to rotate on their x-axis and simply have a "vertical" pivot for the barrels themselves. So if you wanted to fire at a ship to your left, you'd rotate the turret 90 degrees and angle the barrels upwards towards it. Does that make any sense? Probably not...I'm having a great deal of difficulty articulating what I'm picturing.

It honestly never occurred to me that they would rotate more like a WW2 bomber turret.

I feel compelled to respond to some of these posts...I don't yet have a passable update, but hopefully will at the latest be posting the final version by next Monday.
powell99: Thanks
Wedge009: Yes, attachments. My apologies.
Kuhuna: Thanks
Deathsnake: Thanks. I have yet to make that ship - but I suspect that certain people would have my head if I did that before I did the Concordia. She is pretty, though.
Iceblade:....The logistics of that must be horrifying.
Haliwali: Let's see it!
Bar-None: Thanks - I think it will all truely come together when she does have paint...
Vinman, Chris Reid: Love sometimes leads to kids!
Mace: Not entirely sure what your point is here, but OK.
Ptarmigan: Thanks
Michelle D: That's a good question. I definitely plan on putting the side belly hatch in there, with a small amount of interior detail, but other than that, I can promise nothing.

onecrazymofo: Thanks, but no. This is not a True Wing Commander game. I'm not EA, this is not official, and we don't have a game yet... We've got some sorta pretty artwork, a lot of it, and some code. the two have not really met in the middle yet.
Toast: Thanks. I know what you mean about the front landing gear, but if you look at the references I provided in the first post, that's the level of the landing gear visible in the game.
Deacan: Yeah, but you'd have to crawl on your belly to get under the guns.

Aginor: Mostly well said - I agree that we're not making a true WC game, but not for the all reason you listed. The reason this is not a true WC game is this: We're not EA, or the current holder of the WC license, we're fans. And being fans, and not a company out to create a profit or a strong standing franchise, we will make certain game design decisions that a real game company might or probably wouldn't make. The final quality of the game will not be at the level of a real game company doing a real game - we're 2-3 people, for crying out loud - there's just no way we'll be able to cover that many bases. In fact, that's one of the reasons we're looking to cut-down most of out game ideas - we've come to realize that we're just too strapped for time to truly do the idea we originally had any justice. We still want to do something, but we've got to look at it realistically.
Bottom line: it doesn't matter how good we are - we'll never be able to manage the scope, depth, and quality of a True Wing Commander Game. We've come to peace with that.
Sylvester: Thanks for your support, but we're under no illusions - We're making a fan game.
Wedge009: Heheh, it's pretty impressive looking, no matter what the angle.

c0mc0: Well, it's not just a matter of changing colors, but changing designs, patterns, and text, to a certain degree. So right now here's what we're doing:

Now here's the cool part: We take the first 3 of these texture sets, and apply another texture as a multiplicative overlay on the 2nd UV channel. This is mapped to the 0,0-1,1 uv space and covers every inch of the ship. This is what we back our ambient occlusion ( the thing that makes the corners darker than the open flat spaces) and the colors of whatever squadron we want this particular ship to be.
I hope to show you guys the finished product here very soon.

As for the turrets, I was going for literal accuracy this time around - there's also the fact that this is a military ship, and they (in the WC universe) weren't known for having a lot of diversity when it comes to gun loadouts, ship-to-ship.

Anyhow, thanks for the deluge of feedback. You guys have me all guilty for not having finished this thing already.

Howard Day said:
You guys have me all guilty for not having finished this thing already.
Click to expand...

Never! I think Standoff is a good example of how people will still be pleased even if it's not entirely released 'on time'.

No, it's we aren't pleased with our release; we rushed it and now it's all buggy