Here’s a weird one: the electronic music group Songsworth creates music inspired by science fiction worlds… and it seems they’ve taken some inspiration from the Wing Commander universe! Tracks on their 2013 album Second Star to the Right are titled "Wing Commander" and "Kilrathi Battle Cruiser." They appear alongside other songs inspired by Star Trek, Dune, Isaac Asimov’s Robots and more. Neat stuff! You can listen to both via Spotify. 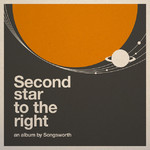