Mwikan of The Redoubt has painted some pretty nifty Kilrathi fighters and is preparing them for battle at this year's Millennium Con (updated link). The gathering is dedicated to tabletop miniature gaming, and these ships look like they'll fit right in! He'll be using the 5150 Fighter Commander game as a backdrop for the action. The ship designs might look familiar to you - they're the same base models popularized by AAN and Astro Commander a couple years back, and they're available as 3D prints via the Dream Foundry if you're one of the many talented Wingnuts who'd like to paint their own! 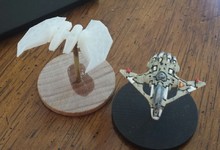 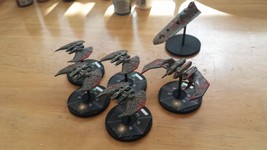 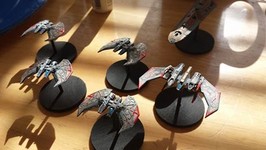 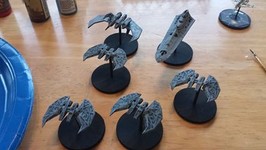 4x Dralthi IV, a Vaktoth, and a Kilrathi Torpedo Boat for 5150 FC. Primed with cheap Wal-Mart flat black spray paint, base coated with Reaper Gray from the core set and then painted with Vallejo and Army Painter acrylics with a wash of Army painter Soft Tone ink wash.

I am doing some prep work for this year's Millennium Con and am planning on running two sessions of 5150 Fighter Command with a "Wing Commander" setting... I'll have Dralthi II, Dralthi IV, Vaktoth and a Custom ComCon ship (Frigate) for the Kilrathi and the Confederation will have (at least) Hornets, Rapier II, and some Longbow Bombers.

Should be a blast!