We're now just three weeks away from the scheduled launch of Wing Commander on Blu-ray, and competition continues to push down prices. The stalwart Amazon has held steady at $12.99 so far, and they're still probably your best bet to get the disc on release day. Walmart, Barnes & Noble and Deep Discount have also posted lower prices at $12.96, $12.72 and $12.29 respectively. DVD Empire would seem to have the lowest position at $11.99, but Target has also come down to $12.29. After Red Card discount, this drops to just $11.68 with free shipping! Most places offer free shipping at $25 or more, but Target and Amazon will most likely be the cheapest/quickest. Not to be outdone by the states, Amazon.ca has lowered their number from $16.99 to $9.97! 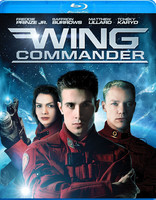 As fans' excitement rises with the approaching street date, there's one potential wrinkle. When we first learned of the BRD in May, it showed up in Walmart's listings with an August 13 release. Virtually everywhere now shows an August 6 date, but Walmart has not changed. Publisher Anchor Bay has circulated a press release dated June 20 that highlights the six 20th Century Fox titles that they are shipping in August, and it still shows an August 13 street as well. We're still holding out for August 6, but don't be too disappointed if there ends up being a one week delay. One way or another, it'll be here soon enough!