PC Gamer's latest retro gaming article goes back and remembers Wing Commander 3. The piece is penned by Richard Cobbett, who's written at length about the series over the years. Similar to an FMV analysis he posted back in 2010, Mr. Cobbett reiterates that Wing Commander was one of the few gems of the 'interactive movie' era that really shined and continues to hold up well even today. He's less enthused with how the gameplay fares today, but whenever I fire up The Heart of the Tiger, I'm still tickled that the mission doesn't take 12 minutes to load! Check out the full article here. Thanks to Jake for spotting this one. 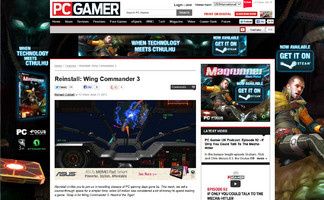 My only question is... can I get Magrunner on Steam?

Wing Commander 3 is one of the very, very few examples where it worked. The series had always had a cinematic flair, with a huge cast of characters, animated sequences for everything from taking off from your fleet carrier to being awarded a medal of bravery for surviving ejecting into space. It had a then-insane budget of four million dollars, a cast headed up by Mark “Luke Skywalker” Hamill, an epic branching storyline, and — this definitely helped a little — jaw-dropping space combat.

Even now, with the ropey-effects, chunky FMV, and the realization that said combat really hasn’t aged well, Wing Commander 3 holds onto a surprising amount of majesty. The opening chords in the soundtrack are powerful and bombastic. Our first scene is of the triumph of series baddies the Kilrathi, and not merely over a group of nameless mooks, but Angel, both lead character Col. Blair’s lover, and one of the series’ most prominent pilots from the very start. Everything you see is in service of one single statement: Wing Commander 3 means business.