Yesterday, RSI ran a piece introducing Dave Haddock to fans. He talks about his role at Cloud Imperium and writing the fiction updates that have been running on the site.

Donations have continued to pour into the Star Citizen site. (At the time of this update the total had just crossed $3.7 million.) The $3.5 million stretch goal was hit yesterday unlocking the 45th star system, cockpit customization and a ship-to-ship boarding mechanic that players can use.

Earlier today, the total hit $3.6 million unlocking another system. The Ellis System is home to a race known as the "Murray Cup" along with several other points of interest. Along with Ellis, the "Vice Admiral" Citizens Card was also unveiled. Pledge account issues are also believed to be fully resolved. 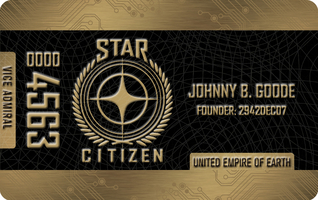 Not to stop there, Kickstarter backers also reached another goal. Asteroid bases will not be part of the Star Citizen universe. Judging from the description, someone certainly thought of the bar rumor from Privateer. Finding the bases won't be easy as they won't appear on any navigation charts. Better make sure your Exploratory Services contract is up-to-date! Check out the write up here.

The asteroid bases will take on two forms: the first is active smugglers bases with trading and the seediest bars in the galaxy offering some of the most dangerous–and lucrative–missions outside the law. The second is secret supply depots that you can discover, raid and contest yourself. Their locations won’t be on any map, the stuff of legend and hearsay. You’ll learn about them at seedy mining bars or through tireless exploratory scanning of asteroid bases or even by outfitting your ship to stealthily follow successful smugglers.

The buzz from the IGN post above also pushed the pledge total over $3.7 million. This unlocked the Cathcart System. Cathcart is described as a "galatic junkyard" and "pirate system". But also a place where citizens can get a deal on upgrades for your ship.

Cathcart’s largest “world” is called Spider, a sprawling mass of abandoned UEE warships spiraling in ever-increasing mated tendrils around an ancient colony ship’s massive hull. Visitors are encouraged to keep their suits on during their stay, as the shoddy construction of the inhabited areas often gives out. Still, it’s a great place to pick up a bargain if you aren’t picky about what century your ship upgrades came from.