NinjaLA has refined his retro ship sketch with intrepretations of what early war Ferrets and Broadswords may have looked like. The Ferret is a a little more hard edged, and the Broadsword incorporates the best elements from the Wing Commander Movie and game variants together. An enlarged and more carefully detailed A-17 takes the concept further with even more characteristic bomber features. Let Ninja know what you think at the Discuss link below. 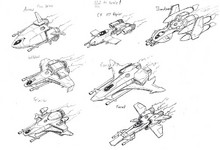 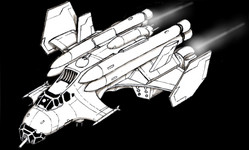 Where are the side turrets?

They are there, but hidden.. I put them under the winglets on the fuselage just so they wouldn't be accidentally shooting at those giant shipkiller torpedos. There is also a tail gun in the back and a cannon on the nose for strafing. and I think the next version will have a ball turret on top and bottom.. to give it more of a bomber feel.