The first indication the public had Wing Commander was on the way was this teaser image, which began to appear on the back of some Origin catalogs in early 1990. The game didn't even have a name yet--it wouldn't for a while--but Origin clearly recognized that they needed to get the buzz started early. Even in those days it was clear that Wing Commander was going to be a game changer. 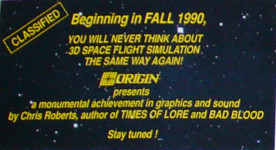