Virtually the entire catalog of EA games is now on sale in the iPhone/iPad App Store. Some seventy titles are discounted to 99 cents. The promotion is timed in sync with the launch of the company's Pogo app, and it also ensures that EA games dominate the sales charts during a critical sales week. You can find the listing of games via iTunes here (iPhone/iPod) or here (iPad). In other iOS news, The 7th Guest, The Fatman's other famous score, was just released on the App Store last week. 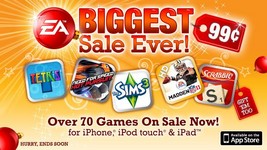