I knew I'd seen some of the Wing Commander IV storyboards before and as luck would have it, I came across the June, 1995 issue of E2lectronic Entertainment magazine while cleaning house last weekend. The article scanned below, written less than four months after Heart of the Tiger shipped, was the first preview of Wing Commander IV. The reveal was likely a major coup for the magazine whose memory has otherwise not survived the test of time--so much so that the two page piece offering very limited details became the month's cover story.

And that cover may be the most important part of the article! Note that the only artwork included are early storyboards, pictures from the Wing Commander III set and the special cover image. It was rendered by Origin specifically for this reveal and was not used in the finished game. This shot of Hellcats flying past the Lexington is the first piece of finished Wing Commander IV artwork and shows how early the game's artists had a handle on the game's art direction (and seemingly puts to rest the old rumor that the Lexington was originally to be a Confederation-class dreadnaught).

The text of the article is also very interesting. Some of Origin's claims were right on the money (more professional video sequences, better terrain in ground missions) while others failed to materialize. We know now that the improved textures were developed but ended up looking muddy and unimpressive when compressed for gameplay... but very little has ever been said about the fate of the strategic mission management gameplay spoken of here (it was likely reduced to the unplayable 'second wing' feature that appears in several missions).

Special thanks to elend, whose Photoshop skills restored a badly damaged magazine cover to its original glory. 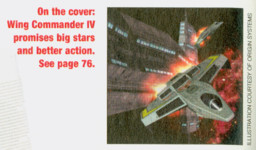