At the end of Wing Commander Prophecy's first act, the tone of the story changes dramatically. We open act two with a CG sequence representing Dallas' funeral and then transition to a the TCS Midway's rec room where Bob-o-Matte is doing a tarot reading for communications officer 2nd Lt. Anderson. The large cards have stunning, unexpected art… were they created for the production or are they a commercially available tarot card? 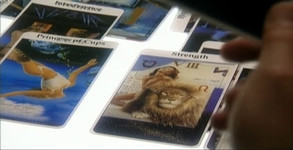 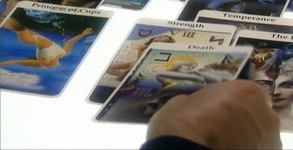 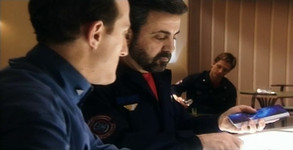 But first, we're going to answer your big question: who the heck is Bob-o-Matte?! You likely know that Wing Commander III, IV and Prophecy use a 'green screen' system for their computer generated backgrounds (Wing Commander IV and Prophecy use more real sets but still feature many composite shots.) The 'green screen' technology used by the games is a compositing system called Ultimatte. And the people hired to provide and operate this system in the film shoots was a Los Angeles company called BlueScreen LLC run by Bob Kertesz. Mr. Kertesz was apparently a favorite of the film crew and for Wing Commander IV he was tuckerized as BOB-O-MATTE, one of the Banshee pilots shot down at the start of the Peleus series. He's back as a tarot-dealing redshirt in Wing Commander Prophecy (and according to this continuity polaroid is a full Colonel with three distinct campaign ribbons!) 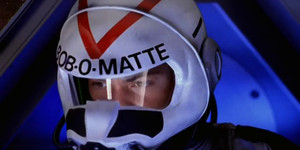 Back to the tarot deck: it is, in fact, a commercially available deck that was especially popular at the time. The deck is called the Rohrig Tarot and it was designed by artist Carl Rohrig in 1991. The designs are ultra modern, mixing imagery like race cars in with more traditional tarot features. Original Rohrig decks like the one seen in Prophecy go for several hundred dollars today but a variety of replica versions are readily available today. For your reference we've tracked down the artwork to all nine cards visible in the game. Warning: some of the card details are not safe for work On the left, from the bottom going up: Princess of Cups, Interference and Prince of Disks (sideways.) On the right: Death, Strength and The Fool, Temperance, The World and Pleasure (sideways.) Just what this tarot reading might read… we'll leave to the experts!