Long before there was Standoff, Saga or Unknown Enemy, Wingnuts would create single missions or brief campaigns for everything from the first Wing Commander to Privateer. We've collected most of these in the Fan Missions section, one of the oldest CIC pages. Forums member Sharpshooter recently stumbled upon two old sets of fan-made missions for Wing Commander I and decided to help them get more exposure by creating game guides for them. It can take a little bit of effort to get certain custom missions working, so be sure to check out the documentation for detailed instructions and last minute notes from the creators. You can find all the archived missions here. A decade ago when these were made, WC fans usually set up vintage computer systems to get older games running. Today it's much easier. Visit our Tech Support section for information on running the old DOS games on modern hardware and operating systems. It only takes a few minutes to configure DOSBox for Wing Commander I. 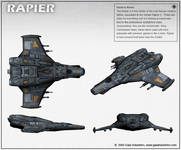