LazyGameReviews posted this image of a teaser for Wolfenstein 3D. It's from the February 1992 digital Apogee catalog advertising the pending launch of the iconic first person shooter. It's a cool little artifact unto itself, but wow, check out that smack talk (plus spelling mistakes) in the footnote!

This is very first ever "texture-mapped" three dimensional (3D) game with REAL-TIME scrolling and panning! Most 3D games use the polygon fill method, such as the flight simulators available commercially. Wolfenstein 3D uses a 3D technology that has NEVER been seen commercially. (The Wing Commander games tried to fake tuxture-mapped 3D graphics, but the results didn't work very well.)
Click to expand...

LOAF observes, "Odd, the only Wing Commander games at the time used the exact same solution as Wolfenstein: a 3D environment with 2D sprites for enemies that scale and rotate!" Whatever the underlying tech was, Wolf 3D was released between the WC2 expansions and Privateer, which certainly did work quite well from both a graphical and narrative perspective! The first Wing Commander game to feature fully three dimensional ship models in its space engine was 1994's Wing Commander Armada, followed shortly thereafter by Wing Commander 3. 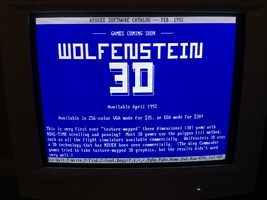 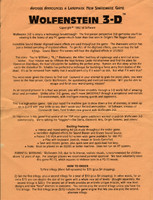