Back in 2004 I became the proud owner of a piece of WC4 history; one of the original Wing Commander IV 35mm trailers on film. At the time I purchased the film I was unable to find anyone locally who could digitize it for me.

So it's been sitting in a box all of these years and moved with me from here to there and back again. I unearthed it today and thought that now might be the right time to see if I can get it digitized. If anyone has any suggestions or professional advice on this, please let me know!

I will of course me more than happy to share the digitized trailer with you guys.

Here is a link to the original wcnews article: 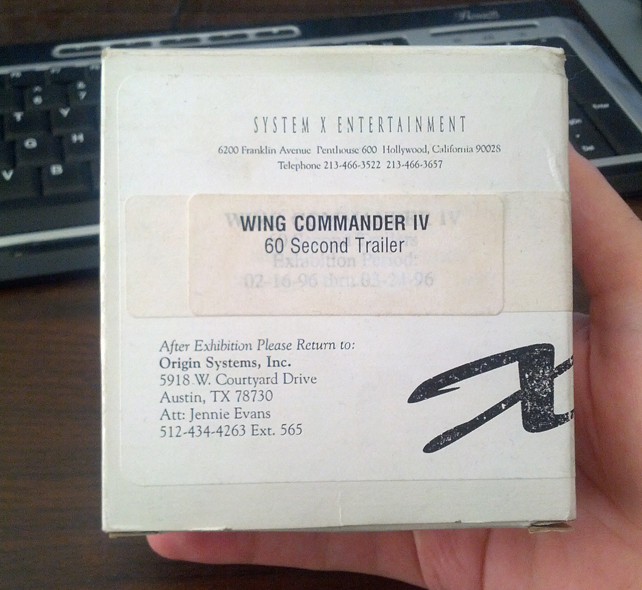 There's a few different places that specialize in digitizing 35mm film (not sure their repute but there's this one for example: http://www.mymovietransfer.com/scanning_process.html). The trouble is that the trailer is basically copyright EA even if they gave them away for free or sold them. So most companies will only do it professionally for EA. Still the price seems reasonable. Basically it's a one minute trailer at 20 dollars a minute with 15 dollars shipping and the cost of whatever USB drive you want to put it on... I imagine you would have the same roadblock with cinelab http://www.cinelab.com/HomeMovie-OrderForm.pdf who also do transfers to hardrives in HD... they have a 75 dollar minimum charge. but are in New England.

Then here's the really crappy do-it-yourself method too where you can project it and then record it with your digital camcorder... or cut it up and buy a 600 dollar flatbed film negative scanner and piece the trailer back together frame by frame... This video's description if you go to the site itself details the process

I had a look at getting this done in the UK a while back. I figured there wasn't much point in doing a transfer in anything less than HD which ruled most companies out. Out of those left, just about everyone I tried claimed to convert all formats but couldn't actually do 35mm when approached. I did get a quote from http://www.stanleysonline.co.uk/ in London who do transfers for the BBC among others. They would charge £300 per hour of film (including the sound track) to HD which doesn't sound too bad except the minimum charge is £158. They didn't have any problems with copyright at least, but it could be a while before I've got £150 that isn't better spent elsewhere.

Well... standard 35mm cinema film runs 24 frames per second, with each frame occupying 3/4 inch in length (4 tractor sprocket holes). At the box's reported length, that amounts to a paltry 90 feet of film, so I don't think the flatbed scanner method is out of the question. I don't think you need to slice anything up, either.

I just peeked at HP's website. They have a 4800 x 9600 dpi scanner with slide capabilities for about $220... not sure what they'd fetch in the UK. Now, at 4800 dpi, 3/4 of an inch equates to a potential 3600 pixels per frame, which is the vertical axis of the projected image (full HD is 1080 pixels on that axis). Even allowing for the black seperation between frames, you're probably looking at being able to double the necessary resolution for full HD, assuming you have the hard drive space for the approximately 1440 images at your selected resolution.

Your potential challenge begins depending on the aspect ratio of the trailer. The two standards I saw as a projectionist were Scope (2.35 : 1), and Flat (1.85 : 1).
http://hsvmovies.com/static_subpages/formats/shooting_formats.html

Flat makes your life easy. It's a 1 : 1 correlation from film to screen.
Scope will drive you insane. The image is squashed horizontally on the film, and projected using a lens that stretches it horizontally (approximately 2 : 1). So, when scanned, you are only getting 1/2 of the selected resolution in the horizontal axis.

Just the 2 cents I have, but hope it's helpful.
W

Most movies are done in scope these days - I can't remember if the WC movie itself was scoped or not.

Then there's the audio thing - there's a stereo optical track along the side (you can clearly see it) - you do need to correlate the audio as it can be a few frames ahead or behind depending on where the optical audio head is. Of course, there might also be a better surround Dolby Digital track in-between the sprocket holes (but you need a DD camera to read it out - it's a little camera that focuses in-between the sprocket holes to capture the DD data off the film). There won't be a DTS track as the film marks are purely a time marker and requires an external audio disc (looks like a regular CD) and special player to sync the audio.

Perhaps someone knows a projectionist that can run it through a standard 35mm camera and someone with a camcorder can cam it?

I'd opt for a transfer by a professional company and not attempt cowboy-methods to capture/scan it yourself. Especially when it involves handling the film itself in a way it was not supposed to. Even the price of buying equipment to improvise the digitizing, which is a one-time process, and manually editing the audio it will never be exactly as good as a real transfer, and still would cost money and manhours anyway.

A transfer by a professional company would be the way to go, the film would be handled by professionals and returned to you, also they mostly have a moneyback guarantee if the endresult is crap.

I've done some more asking around and the guy that runs the British Film Collectors Convention will convert it for me for £25 + media costs which is a lot more like it. He's down in London so I'll have to arrange it all through the post but I'll try to get that moving this week.

Pix said:
I've done some more asking around and the guy that runs the British Film Collectors Convention will convert it for me for £25 + media costs which is a lot more like it. He's down in London so I'll have to arrange it all through the post but I'll try to get that moving this week.
Click to expand...


That's awesome! If we can get the WC4 trailer in HD that is amazing really.

That would be cool! I look forward to seeing that!

I'm curious if calling a local television station, particularly a "PBS" station, if you asked them if they could help you with a small project like this, what they would say?

35mm could potentially be digitized to much higher than even current HD specs. 4K here we come!?

NuAngel said:
I'm curious if calling a local television station, particularly a "PBS" station, if you asked them if they could help you with a small project like this, what they would say?
Click to expand...

Not a lot mate, seeing as us Brits don't have much in the way of "local" TV. Sure there are regional TV areas for both the BBC and ITV, and several independent TV Studios who sell shows to the networks, but actual local PBS stations don't exist, and the TV studios generally tend not to do stuff like this for Joe Public, at least not officially. Tends to be you get a mate who works there to do it on the QT for you. Problem there is you need to know someone who works there

I've only known one guy who worked at the BBC and since he was in local news reporting it wouldn't have helped much here. I've swapped emails with Keith from the BFCC anyway and everything is more or less arranged. He will use the best resolution he can depending on the film. 4K is out of the question but it will be HD at worst which is good enough as far as I'm concerned.

My timing could have been better as he is about to go on holiday, then the BFC convention itself runs until the end of October. It's probably going to be November before I get this back.

I was right about waiting until November but I finally got the converted film back this week and have uploaded the results to Youtube. The quality isn't what I would have hoped as the footage was computer generated first and then scanned onto 35mm meaning it's not all that sharp:-

even the sound is not quite good.. hmpf.. disapointing

I find the results... interesting. The buzzing can probably be cleaned up. But the rest seems odd... the aspect ratio, the lighting, everything. In fact the brightness seemed to fluctuate quite a bit during the playback. I wonder how much was the process and oversight and how much was a really crappy quality trailer to start with...

Still, for everyone's complaining, the version that shipped on the Privateer gold classic cd was... much lower resolution. The only version of this we host is 240x320!

Hmm.. cranking it up to 1080p it certainly looks like there is the quality there to work from to do a nice quality restoration, but that kind of work is expensive and highly specialized. As it stands in it's current state the audio quality and contrast are poor enough that it's not a big advantage over the existing copies.
K

Hello! Just following-up on this as I still have this reel.

I read about a company recently called Vinegar Syndrome which specialize in film restoration and it reminded me of my little treasure. I've sent them an e-mail about getting this digitized.

I'll let you guys know what they say.

I never received a response from Vinegar Syndrome, as mentioned previously. I've still got this little treasure and hope to one day get it digitized and restored.

Kahdragz said:
I never received a response from Vinegar Syndrome, as mentioned previously. I've still got this little treasure and hope to one day get it digitized and restored.
Click to expand...

I took a quick looks and I don't think much has changed in the last 5 years regarding the process of getting 35mm film professionally scanned. You can try and get an online quote from sites like https://www.filmtodvdcompany.com/contact/ and see what they tell you (if they reply at all) about it they'll handle it at all. The cost itself shouldn't be too prohibitive. Right now they have a sale and it could cost you anywhere from 20 - 90 cents a foot to get a transfer (though I would probably aim for a 2k scan even if the source is noisy. The extra few dollars to bump up to 4k probably aren't worth it in this case). Someone estimated the trailer would be around 90 feet long so (minimum charges aside) you're looking at a max of around 80 dollars for the footage

Just out of curiosity I ran 90 ft into their online calculator and you're looking at about 35 dollars to scan at 2k, and then double that to scan and have them do a restoration on it. You need to add a few bucks too for them to capture the audion which pushes your grand total to $77.40
You then have to add nearly double that for the actual media. Depending on what format you want like a 2k pro res file that would be good for professional editing, then add 100 dollars. )
You must log in or register to reply here.
Share:
Twitter Reddit Pinterest Tumblr WhatsApp Email Share Link
Top