We get questions from time to time from Wing Commander fans that read about the WC DIVX and the mistaken rumors of its cancellation. DIVX was a late '90s format based around single-use DVDs. Each disc was encoded and serialized to sync with an online (via dialup) account that controlled playback. Owners could pay to watch again or unlock the disc for permanent use. After just a year of production, the format went bust and inventory was quickly cleared out. As Wing Commander was scheduled to be released for home viewing at right about the same time as DIVX died, there's a persistent belief out there that the WC DIVX was canceled. But that is not true! Circuit City most definitely had them for sale in the summer of 1999, and many of us still have the unopened packages to prove it! Any editors out there are more than welcome to fix the Wikipedia entry accordingly... 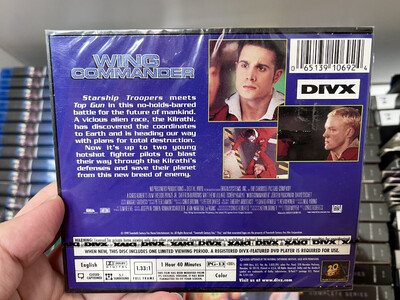 GALLIFREY STANDS: I was randomly reading the Wikipedia article about the DIVX disc format, and it says that the Wing Commander DIVX disc was canceled. I could've sworn that LOAF owns a copy on that format?