Knight26-77 said:
You seriously need to put together a website with all of these and all the little fiction snippets, it would be awesome.
Click to expand...

That'd be neat! In the mean time, there's always https://www.wcnews.com/news/search?body=klavs_models
Last edited by a moderator: May 24, 2018

So beautiful... So large and complex too, as usual, and there's beauty in that as well, having taken a close look to many of your models in 3D editing software (my favourite being your gorgeous Morningstar, though, I loved the inlets). It makes me sad the team at Gearbox didn't get Homeworld Remastered in 64 bit, otherwise one of my long-term goals would have been to try to get your superb fleet in action.

You take requests klavs? lol would love to see the sorthak super heavy done with your twist.
F

What's an "IC rig" exactly, or at least what is this an abbreviation for? Thanks

Fontaine said:
What's an "IC rig" exactly, or at least what is this an abbreviation for? Thanks

phoenix_aod said:
You take requests klavs? lol would love to see the sorthak super heavy done with your twist.
Click to expand...

My WC stuff is typically done at 3am in a vain attempt to calm my brain down for sleep. It's not done on any kind of schedule or production order, so I really don't take requests. That said, I'd love to do a fresh take on a Kamrani corvette, a very similar ship, so keep your eyes peeled. 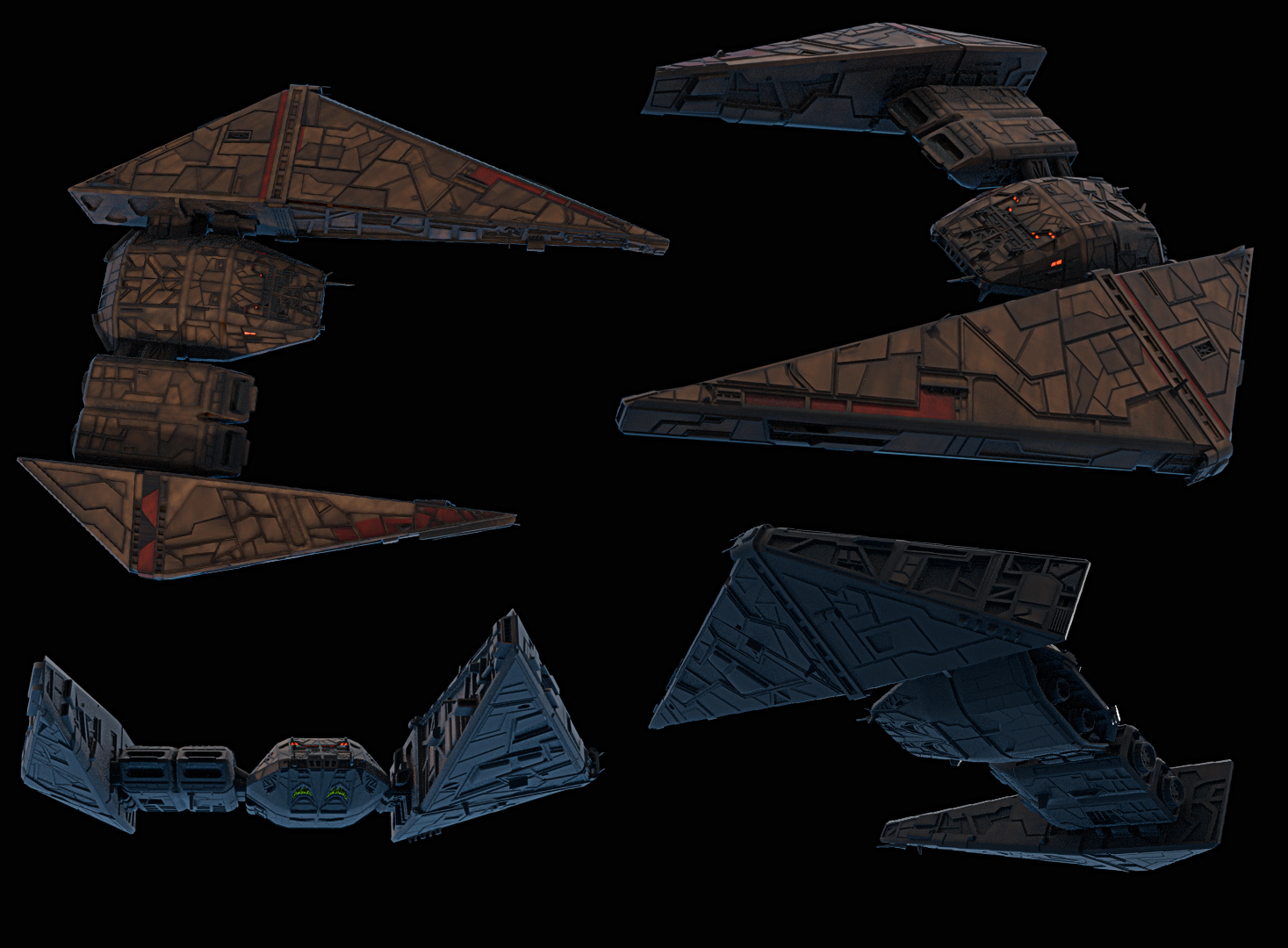 She's so beautiful and... ARGH! That's it, I'm going to kidnap you, shove you in my TARDIS and send you back to 1991 so you can get thee models of yours in the original games, and I don't care if it will require the entire world's computing power to play Wing Commander as it should have looked like!

Hem. How many polygons, if I may ask?

considering how basic the originals were on that ship...
that
is
fuckin
AWESOME
as usual for you

Can't disagree, although I thought we called these "Acceleration Absorbers" in our universe?

Ooh, I didn't think there was any way to make the Kamrani look good. Glad to be proven wrong.

Toast said:
Ooh, I didn't think there was any way to make the Kamrani look good. Glad to be proven wrong.

Toast said:
Can't disagree, although I thought we called these "Acceleration Absorbers" in our universe?

Oh, sh..t, finally Kamrani! How long I was waiting for it

Alright - I've got a work-in-progress here, something I'm building for the Elegy campaign. It's been close to 15 years since I've done any 3D modelling work, and I'm still using the same modeler I was using back then because it's what I'm familiar with, so this one's looking a tad......juvenile, I guess is the best way to put it. But I figured I'd get some input to see how I could best go about improving things, both with the design and with making it look like a proper WC ship.

So, here she is - the Drayman-III transport, take 1. 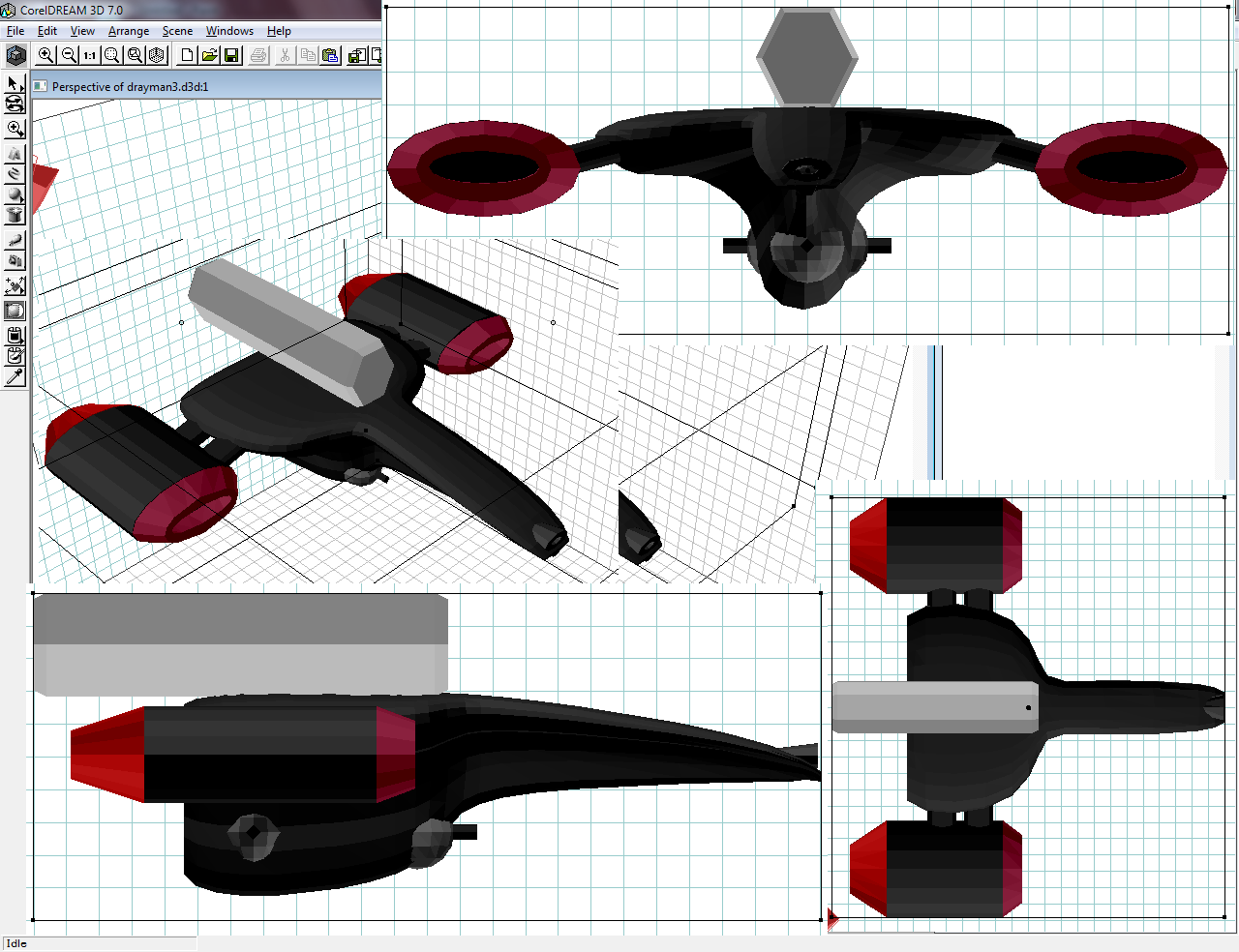 The design is supposed to be an amalgam of the two extant Drayman designs - the text from Elegy reads: The Block-III Drayman (a.k.a. Drayman-III) has only been on the market for the last few years and is an attempt to return to the basic roots of the design. Its improved engine core gives it additional speed even under full load, and its detachable cargo module pods allow for a faster turnaround rate of smaller cargo loads. Its defenses aren't as robust as those of its immediate predecessor, but the overall modularity of the design allows for the addition of extra weapons modules should the ship's master decide to add them. Its cargo capacity is nothing to sneeze at, though it pales in comparison to the Pelican. It is also more expensive than the Pelican, though this can be attributed to the versatility of the craft's design more than anything else. All in all, it is definitely a step up from the previous Drayman models.

What you're seeing here are screenies of the pre-rendered model which I took and then cobbled together in GIMP. The paint job is not done yet, and is in fact one of the things I will need the greatest amount of help with, if anyone would like to help me out. I think the design needs a conning mast - probably dorsal amidships - and that conic structure on the prow is supposed to be a navigational deflector array, which I may scrap. I'm also not satisfied with the shape of the cargo box on the dorsal; I was going for a design like what you see with the Pelican or Clarkson but I think the box would look better if it were a little wider.

Late 2670s period (between WC4 and Prophecy). I should probably mention that.

Anyways, like I said I could use help with the design - with the paint job in particular. I have piped models out of this modelling program all the way to a Lulzbot before, so I can make it available as a model for most newer modelling programs on request.

Hey, that's a great start! Spaceships are a wonderful way to explore 3D and teach yourself a lot without being too concerned for the accuracy of the source material. I think you should start a thread chronicling your work and show us your progress there!

A call for help to all Wingnuts here: does anyone managed to work with Klavs' textured 3D files? Now that I know better what I'm doing with Homeworld, I'm quite confident I can get some of his files ingame, most likely for campaign missions (his stuff is way too big to be used reliably in an uncontrolled environment like multiplayer or skirmish games, given the engine limitations of HWRM). I do have some of his stuff, but it seems some of the files are corrupted, particularly capital ships. If someone can help me, I'd be particularly thankful as it would allow me to work on an add-on.

My problem is that 3DS Max apparently refuses to open the .dae from the archive he posted back then while Blender doesn't load most meshes for numerous files, if it loads anything at all. It's like either my computer has some issue with opening .dae files (but I doubt it), the files are corrupted or there is some plug-in, option or something I do not know about that messes up with the files. Also, when the files manage to be extracted, I'm facing texture-related issues, where the texture files do not get properly on the mesh.

@DefianceIndustries or anyone with 3D modelling experience and a few minutes to lend me, could you take a look at this, please? That could definitely make a campaign add-on for the HWRM mod much better-looking than what I currently have. Depending on what I can do about managing the files' size, it could even lead to integrating a Wing Commander I-II era mode to the mod (definitely no promises there, however).

P.S.: if the mods or admins wanna get confirmation of it before Klavs comes back, I'd be glad to show a screenshot of our PM discussion where I got his authorization to use his models in the mod.

EDIT: OK, I found how to do it. For those interested, Klavs used the editor Mono, which you can grab in a 30-day trial version and which will open the .dae files of his archive properly. At that point, you can convert the files in many other formats (I use .obj myself). If a mod or an admin sees that, can you put this small note somewhere where people interested in this archive can see it when they download it, so they do not get lost too? Thanks!
Last edited by a moderator: May 24, 2018 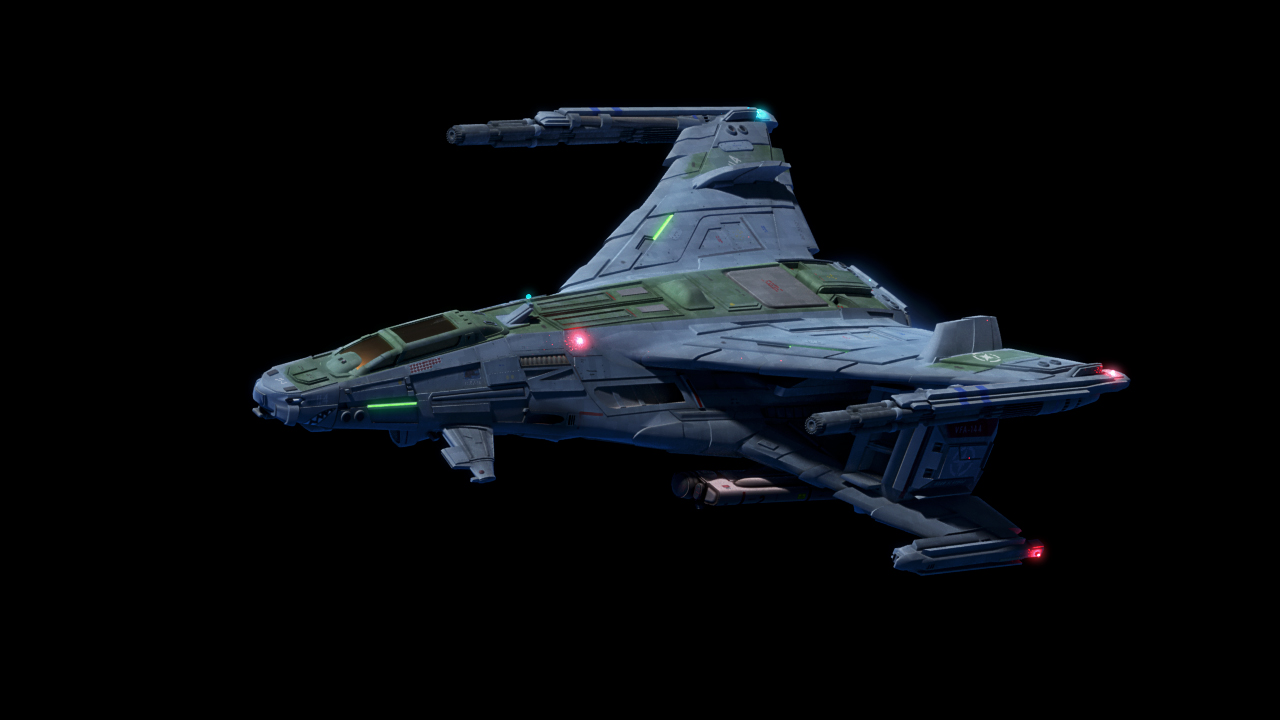 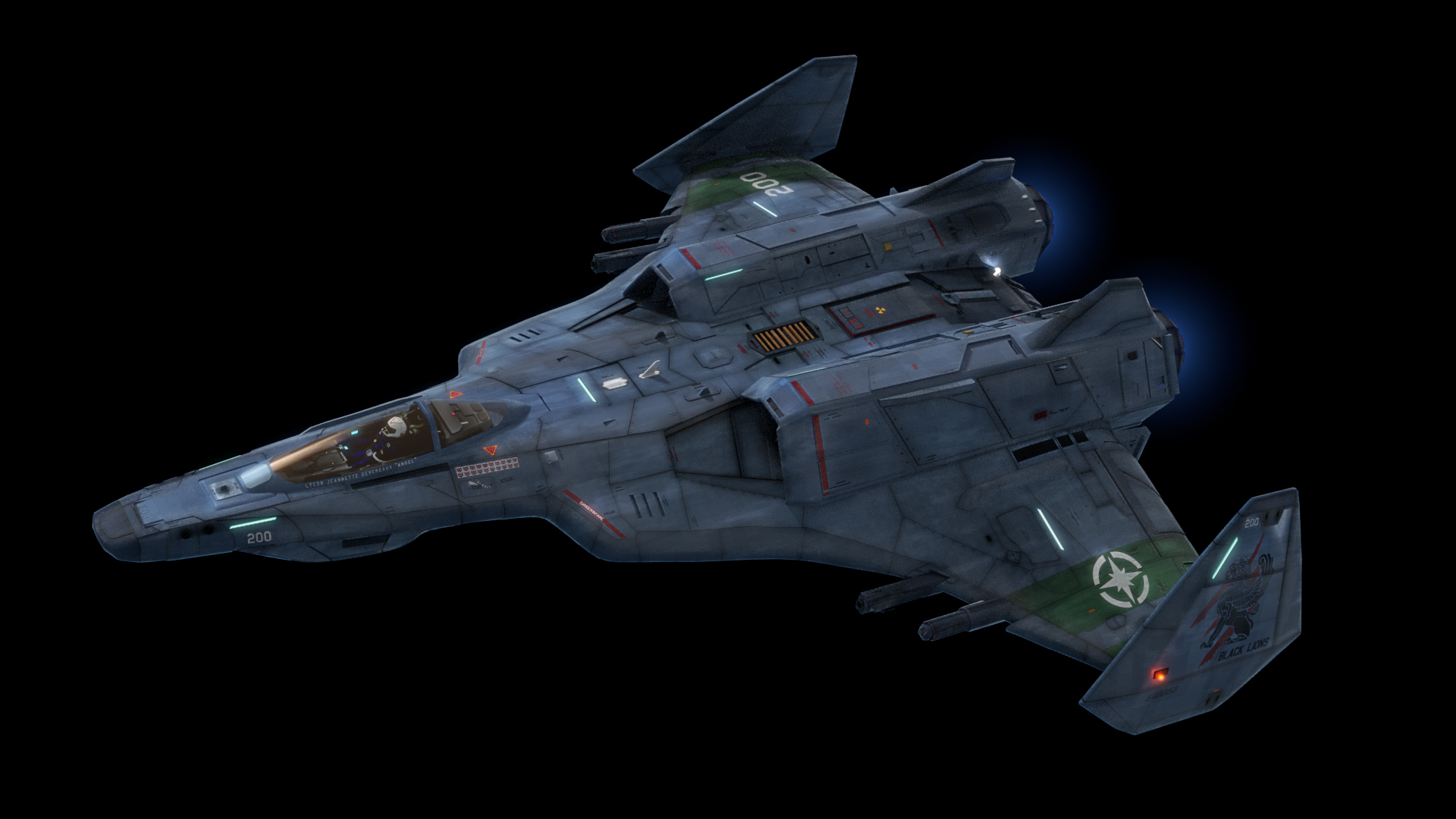 Spent a little time adding some decals and details to some of the old ships. This way I can swap out hull numbers and nose art more quickly, and the details are a lot sharper.

For the Raptor, the top mounted neutron guns have a couple little nods to the movie Rapier's main gun. I think she was made for the Shark's Mouth.

Still jonesing to do some kind of animation with these, but work and life are always in the way!

Here's a couple turntables for you guys.